One sentence synopsis:   A young Mongolian girl from the steppes attempts to become the first female master eagle-hunter in living memory. Things Havoc liked: Among the many things that are to be found in this wide world of ours, the Eagle-hunters of Mongolia are among the most awesome. They are men who use wild-captured golden eagles, the largest true eagles in the world, to hunt game, either for meat or for fur, across the steppes and mountains of Central Asia. I discovered that these guys existed some time ago, and ever since then have gone about my life in the sure and certain knowledge that the title of "baddest motherfuckers in the world" was very much taken, and if you disagree, I defy you to find an occupation more awesome than that of riding horses at full gallop across the steppes while commanding a fifteen-pound bird to slay your enemies. As if that weren't enough, every year, the master eagle hunters of Mongolia and Khazakhstan (the borders between the two countries are pretty much imaginary) gather together in Western Mongolia for the annual eagle festival, in which they compete to see whose eagle is most awesome, and who among them is most awesome by extension. A documentary about these men and their golden eagles would be interesting enough, but this film, by legendary documentarian (and asshole) Morgan Spurlock, and Star Wars actress Daisy Ridley, is about a thirteen year-old girl who, in defiance of a thousand-year-old patriarchal tradition, has decided to join them.

Honestly, what else do I need to say here? This movie sold me from the premise alone, a documentary look at an insanely badass girl doing insanely badass things in the hopes of becoming accepted among insane badasses. The girl in question, Aisholpan, thirteen when the movie was made, is the eldest daughter of a former champion eagle hunter, who expressed interest at a young age in becoming one herself, and... well... proceeded to do just that. The movie chronicles a roughly six-month span in Aisholpan's life as she attends school, lives with her family in a yurt on the steppe, and practices and trains to become a master eagle hunter, a process that begins with her rappelling down a cliff to capture a juvenile golden eagle from its nest, and ends with her hunting foxes through the Kara Khitai mountains at a gallop. Along the way, we get to know her family and schoolmates, get to see the life of modern Mongolian steppe-hunters and herdsmen, and watch the famous eagle festival itself, which includes soon-to-be-Olympic events such as Eagle Dressage (I dare you to call it something else), Eagle Diving Speed contests, and long-range tracking contests judged by elder eagle hunters with talent-show placards to show the scores. You cannot make any of this up. 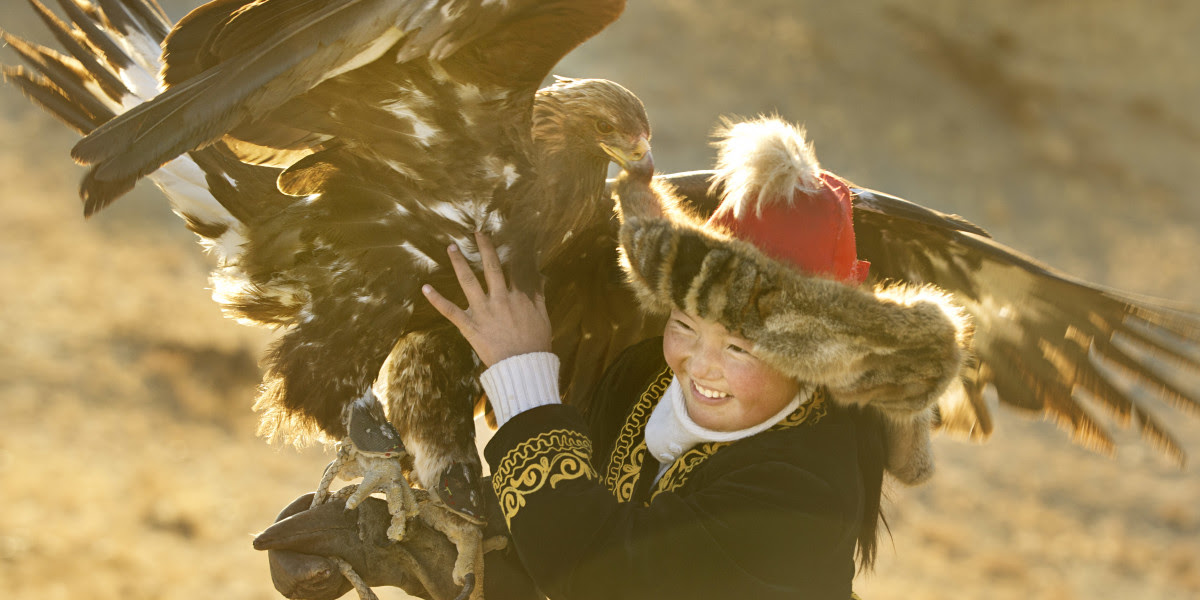 Morgan Spurlock and I have not always seen eye to eye, to say the least, but his turn towards the strange and exotic (as opposed to the revolutionary notion that eating too much makes you fat) has seen me soften my stance on him... at least a bit. This time he and co-director Otto Bell wisely get out of the damn way, simply following Aisholpan and her father around as they capture Aisholpan's bird (who strangely never gets a name), train it, take it hunting and to the annual contest, confident that this sort of material will sell itself. As such, we get a lot of great details, on the details of the family's life, either in a yurt or a broken-down ruin which serves as a winter camp, on the sheer ruggedness of the central Asian terrain, which looks like it should have Conan running across it at any given moment, or my favorite bit, bloopers from when the various eagle-centric events at the competition don't go as planned (one bird gets so confused it starts trying to drag its handler down a mountain, to the uproarious laughter of all concerned). Overall though, the movie is brisk and fascinating, even without the badassery on display, a glimpse into the lives of people that one has little context for and no understanding of, seen in their own terms and in their own time. As such, the casual relationship between girl and bird is what really got to me, the ease with which she and her father handle these enormous (up to 17 pound) birds, hurling them into the air from a full gallop and catching them in mid-dive on a prepared arm. If any of you had any doubts about my earlier claim that these are the baddest people around, half an hour's viewing of this movie will cure you of them.

Things Havoc disliked: A fair amount is made, throughout the film, of the fact that Aisholpan is the first girl to attempt to become an Eagle Huntress in living memory, and that this is in violation of thousands of years of tradition. And indeed, the few times that the movie cuts away from Aisholpan and her family is for the purposes of interview clips with assorted stern, elderly Mongolian men (all wearing spectacular coats and hats) who frown in disapproval and speak about how girls should not participate in the sport of eagle hunting, for all sorts of the usual bullshit reasons. And yet, when it comes to Aisholpan's actual efforts thereto, absolutely nobody seems to have the slightest problem with it.

Please don't get me wrong, I am not complaining that there was not more sexism in the movie. I am complaining that the movie seems to be trying to generate some for the purposes of drama. Aisholpan catches her eagle, trains with it, and enters the premier competition in the world to showcase her art, unannounced. And yet rather than twirl mustaches or argue, the Mongolians running the contest and participating in it seem to regard her as a curiosity more than anything else. She is allowed to participate without seemingly a single objection raised, is judged more than fairly (given the results), and cheered on for her efforts, ultimately successful, at trying to join this most awesome of groups. All credit to the eagle hunters involved, but the movie plays heavily through narration and editing on this notion that the dark forces of patriarchy are arranged against her, when none of them are actually in evidence. Perhaps there was a lot more pushback behind the scenes that we didn't get to see, and certainly the fact that Aisholpan's father is a two-time champion eagle hunter probably did not hurt her acceptance, but the way the movie is shot and thrown together, it feels an awful lot like a bunch of Western filmmakers trying to generate the sort of parochial drama that they assume a traditional culture must be inculcated with, when the culture in question may simply not give a shit. It's not like the Mongols (or for that matter, most nomadic groups) have no history with women taking on traditionally-male roles in war or hunting, but then I'm no anthropologist. What I do know is that a narrator insisting over and over to me that Aisholpan will face tremendous adversity due to being a girl, coupled with us seeing absolutely no signs of this adversity beyond a handful of staged interviews with people somewhere else, does not speak well of the objectivity of the filmmakers.

But it's not like Morgan Spurlock would ever distort the truth to fit his pet theory, now would he?

Final thoughts:  Ultimately though, I'm here to review a movie, not whine about Morgan Spurlock, and The Eagle Huntress is an excellent documentary, with an instantly-captivating subject and plenty of stunning shots of Mongolian landscape, majestic eagles, and the nerveless handlers thereof. For the shots alone, this movie would be worth seeing, to say nothing of everything else we are privileged to bear witness to throughout it. The story, at its base, is fairly simple, despite the efforts of the filmmakers to gussy it up for primetime, but a simple story is no vice, especially not in a documentary. As such, if you can find The Eagle Huntress anywhere, I recommend it highly. After all, if you have aspirations of becoming the baddest dude on Earth, it's only a good idea to see what your competition is capable of.