One sentence synopsis:  The Incredible family struggles to get Superheroes accepted by the populace at large while facing down the threat of the mysterious Screen Slaver. 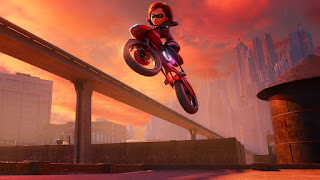 Things Havoc liked: It's hard to imagine the cinematic world that the original Incredibles was released into in 2004, a world wherein superhero movies were considered a risky proposition, cinematic universes did not exist, Marvel made bad movies, and Brad Bird was an ex-Disney animator, who had directed and written a well-regarded bomb called The Iron Giant, and whom Pixar was taking one of a series of massive gambles on in entrusting him with another animated picture to helm. Of course that gamble paid off, with Incredibles becoming one of the many sterling victories that led Pixar to dominate the animation landscape of the 00s. In the wake of its success, I, and others, wondered for years why Pixar never followed up on such a rich opportunity, particularly as other sequels such as Monsters University or the Cars followups came and went. I still don't know the answer, but I do know that here we are, fourteen years later, and Bird has finally come up with the sequel we all expected years ago.

Picking up exactly where the last film left off, Incredibles 2 continues the (mis)adventures of the Parr family, still struggling with the fact that superheroes like them are officially illegal. With their existence exposed yet again following the first movie, and their house destroyed by a supervillain, they come into contact with a pair of billionaire siblings who intend to see the laws against superheroes reversed through timely, high-profile actions and heroics. While Elasti-girl (Holly Hunter) goes out to fight crime, legally or otherwise, her husband Mr. Incredible (Craig T. Nelson) must stay at home to take care of their kids, Violet, Dash, and Jack-Jack. This much the trailers reveal, and I wasn't exactly enthralled with the prospect, as the "bumbling Dad trying to take care of the house and kids" routine is a staple of bad sitcoms for a reason. To my surprise though, these sequences are probably the best ones in the film, full of sight gags and general madness enough to keep the movie moving. As with the first film, the characters are both well-drawn and well-animated (I apologize for nothing), and the movie doesn't spend a lot of time on Mr. Incredible's incredible shortcomings, instead going rapidly for mad science, the insanities of a superhero fashion designer (voiced again by Brad Bird), and battles between a superpowered baby, a raccoon, and physics. The best parts of Incredibles 2 are when the characters are just allowed to exist in their world together, as it was in the first movie.

Not that the rest of the movie is letting the side down, necessarily. Samuel L. Jackson's Frozone gets a much increased role, including impromptu babysitting support, which is always good for a laugh. The action, and there is quite a bit of it, is well-paced and orchestrated beautifully, with most of the work going to Elasti-Girl, and standout sequences involving a fistfight in a Faraday Cage covered in hypnosis-inducing screens, and an extended brawl in the innards of a cruise ship between a girl who can turn invisible and summon forcefields and another one who thinks with Portals. The voice-acting is top notch across the board (save for Nelson, who sounds tired and detached from his role), with all of the old standbyes returning for more, and the addition of everyone from Catherine Keener (second week in a row I've encountered her), to Johnathan Banks, Phil LaMarr, and (of all people) Isabella Rossellini. 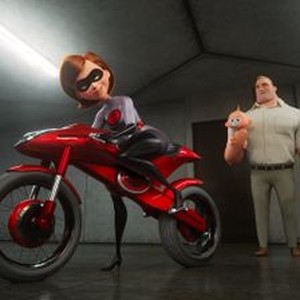 Things Havoc disliked: If all of the above seems rather mechanical (here is what the movie is about, here is who is in it), I assure you, there's a reason.

You see, Brad Bird, moreso than most writers or directors in Hollywood, is obsessed with a single idea, that of special, uniquely gifted people who are hated and feared by the wider society around them. The Incredibles 1 was about this. The Iron Giant was about this. Tomorrowland was about this. And guess what, Incredibles 2 is... also about this. Granted, to a certain extent that makes sense, the first movie set up a world wherein supers were feared and rendered illegal, and dealing with the ramifications of that is an obvious way to take the story, but that's just it, it's an obvious way to proceed, and one that should have been re-thought. Incredibles is set in no discernible time, but seems to be focused on some kind of golden-age-of-comics era crossed with a comic book future, and that whole dynamic does not jive very well with sad parents contemplating homelessness for themselves and their children because their superpowers make them outcasts and pariahs. I don't mind a bit of tonal discord now and again, but Bird's continuing fixation on how put-upon the special people of the world are gets in the way of the story, and is one of the reasons he's often accused of being way too Randian in his fixations (trying to get a movie version of The Fountainhead produced doesn't help). I'm not going to go that far (Tomorrowland spent half its runtime rebutting such allegations by casting the Randians as the villains), but at this point, Bird has said everything there is to say on this subject, and it's becoming boring.

And when you take that subject out of the movie, there's just not much to Incredibles 2. The plot is... fine, I guess, but entirely predictable from beginning to end, with yet another villain who is not only telegraphed but out to get the Parr's because they resent special people for some reason (*yawn*). The progression of the story is pedestrian in the extreme, with everything happening because it makes sense structurally to happen. When the end of the movie comes, there's little-to-no emotional catharsis to anything, because the stakes have never been established in a way anyone can relate to, and if the MCU has taught us anything, it's that this is something great comic book movies need to be able to do. Incredibles 2 cannot, which in turn leads one to question automatically if it can be called a great anything.

Final thoughts:   I see why Incredibles 2 made a billion dollars and why it is popular, for there's nothing really wrong with it, but like most of the films I've seen in 2018 so far, there's not a lot really right with it either. The characters are engaging enough, particularly Violet, and the animation is generally engaging and occasionally interesting (though it does come with a warning about photosensitive epilepsy, so YMMV). But there's just not a lot within it that demands to be seen. Maybe that's faint criticism overall, but I'm just getting tired of movies that refuse to insist on a reason for their own existence.

Go see Incredibles 2 if you're interested. I, on the other hand, am moving on to smaller and better things. I hope.

Next Time:  Smaller and Better Things (I hope)