One sentence synopsis:  A young man with a gift for getaway driving tries to extricate himself and his girlfriend from the criminal world.

Things Havoc liked:   Edgar Wright is a good filmmaker. This much is not really in question. He's made a number of original, interesting, stylish movies like Shaun of the Dead, Hot Fuzz, and Scott Pilgrim vs The World, and was in line to direct Ant-Man before Disney forced him out over the dreaded "creative differences". Following his departure from that film, Wright decided to revive a passion project that he conceived of all the way back in 1993, a movie about a music-loving kid who drives cars really well, and about the various cast of criminal ne'erdowells that he practices this skill with.

Who is this kid? Well, that would be Baby, played by a young actor named Ansel Elgort, whose previous roles were all in movies I have desperately avoided seeing (things like the Carrie remake, Divergent, or The Fault in our Stars). Baby (where he got that name is never explained), is a supremely talented driver who relies on music, mostly indie rock classics from the 60s through today, to not only time the mind-shatteringly difficult stunts he pulls in the various commuter cars that he hijacks for his missions, but also to drown out the tinnitus that he is afflicted with, thanks to a car wreck as a child. Don't take any of this preposterous setup seriously though, as the movie doesn't much, simply throwing character traits that the filmmakers imagine sound cool at the wall and seeing what sticks. Elgort himself is actually quite good in the role, a sweet, down-home southern boy with an encyclopedic MP3 library and a penchant for recording the criminal discussions of his co-conspirators, not for blackmail material, but because he likes to remix them into mix tapes. And a sweet young thing like Baby must, of course, have a sweet young thing as a girlfriend, in this case Lily James, as Debora, a waitress with a heart of gold and an eye for fellow sweet young things. There are rules to this kind of setup, after all. 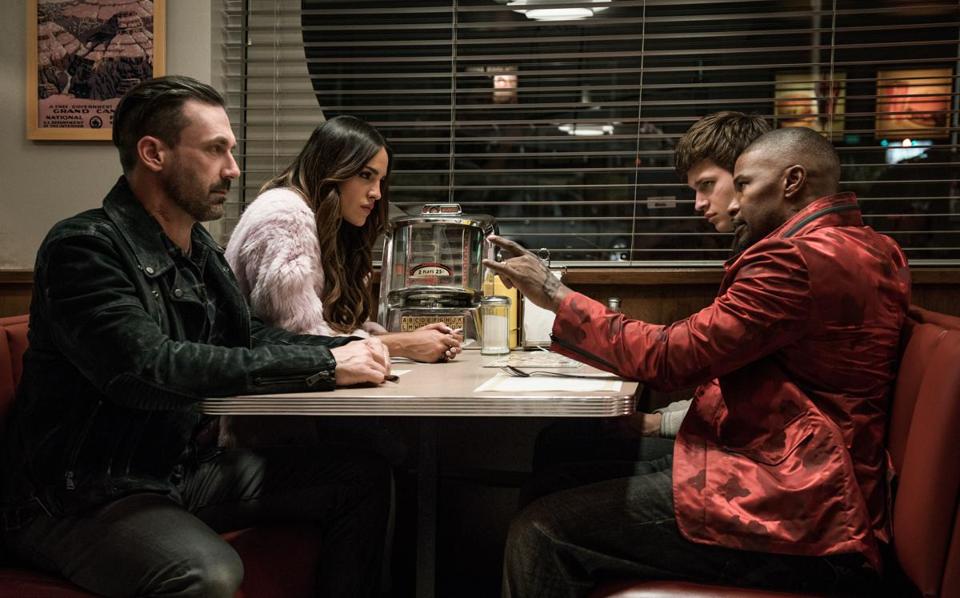 So who else is in Baby Driver? A lot of people actually. Kevin Spacey and John Hamm get to play criminals extraordinaire, the former basically channeling his House of Cards persona as a ringleader who calls the shots, the latter as a sexed-up playboy who, one senses, does these jobs because they are fun, and because his hot girlfriend (Eiza González) wants to do them. I jump at any chance to see John Hamm in anything, and Spacey is a fun presence even in bad movies, which Baby Driver is manifestly not. But neither Hamm nor Spacey can hold a candle to Jamie Foxx, playing a wound up impulsive killer named Bats, who seems to be drawn from a combination of Pulp Fiction and Training Day. Foxx is always at his best when he's playing characters that are a little bit deranged (Any Given Sunday proved that, if nothing else), and so naturally he's in his element here. If you just want to watch good, fun actors having a blast bouncing off one another, look no further.

And that's really the key to Baby Driver. It's not the sort of movie where plot synopses and dramatic acting chops are the order of the day. It's instead the sort of movie that was more common around twenty-five years ago, a film that's about a style more than it is a plot or a character set. It's the kind of movie where a character will slip headphones on and listen to an indie rock song that just happens to narrate everything he encounters while fetching coffee that day, where characters exhibit superhuman feats of timing, skill, and coolness so effortlessly that nobody even acts surprised when they handbrake their car into a u-turn on a freeway and begin weaving through oncoming traffic at a hundred miles an hour. It's the kind of movie where people pop up out of nowhere with guns whenever they are needed, where everyone speaks in the same metaphor-laden dialect without being prompted, where everyone has a name like "Doc" or "Buddy" or "Baby", and there's no real need to explain why, because this is just a world where cool things happen because they are cool, and everyone is kind of expected to already know this.

Things Havoc disliked: In short, it's a Tarantino movie. And that's a problem, because Edgar Wright is not Quentin Tarantino.

Now, granted, neither is Tarantino himself on occasion. I'll be the first to admit that Inglorious Basterds was a bit of a disaster, and Django Unchained was about two thirds of a good movie stapled to one third of an awful one. But even in his down-periods, Tarantino is a legitimately great filmmaker, a genius of style over substance who has produced some of the most astounding works this sort of genre has to offer. And while there's a case to be made that Edgar Wright is also a great filmmaker (both Hot Fuzz and Scott Pilgrim are legitimately great films), this is not his genre or style, and it shows.

Remember how I mentioned that Wright dreamed this film up in the early 90s? Well that's what this whole exercise feels like, an early 90s indie film, aping quite directly the style of Tarantino masterworks like Pulp Fiction and Reservoir Dogs. And that's fine, really, except that Pulp Fiction and Reservoir Dogs were revolutionary movies, legitimate masterpieces that redefined how films could be made, while Baby Driver feels like a fun weekend for the cast and crew, driving around downtown Atlanta and reciting cliched dialogue ironically. It's not that it's done badly, in fact in several moments its done quite well, but quite well is not a good enough excuse when the plot is as conventional as "earnest criminal wants to give up his life of crime but has trouble getting out". Pulp Fiction, which this movie so desperately wants to be, with its long-takes and musical sensibilities and dialogue cribbed in turn from 70s B-movie classics, had a plot that was sprawling and multi-layered, told out of order and re-arranged into a cinematic ouroboros. Baby Driver, meanwhile, carries a plot so standard that I've seen three separate versions of it this year alone. Reservoir Dogs, which this movie also desperately wants to be, punctuated the collected and luxurious dialogue of the various characters with moments of stark brutality and wild tonal shifts that purposely disoriented the audience for effect. Baby Driver, meanwhile, seems to have gone through the trouble of obtaining an R-rating just so it could say 'fuck' a couple of times. Pulp Fiction and Reservoir Dogs, in short, were created by a master of the genre. Baby Driver was created by someone who admires a master of the genre, who may himself be a master of other genres, but not of this one.

Final thoughts:   I don't want to give the impression that Baby Driver is a bad movie, because it isn't, not at all. Indeed it's a fun movie with fun driving and fun actors having a lot of fun. But the critical acclaim it has been garnering on its route through the festival circuit puzzles me, if I'm being honest, as the movie is really nothing more than a fun diversion with a couple of nods towards much better films of yesteryear. I have nothing against throwback films, nor against skilled directors trying their hand at another style than the one they got famous for, but not all such experiments are going to result in Oscar-caliber stuff, and Baby Driver, while a fun diversion, is really nothing special, all things considered.

That said, gearheads or driving enthusiasts who like anything with a car chase will find Baby Driver diverting, as will anyone who just wants to kill a couple of hours watching something reasonably fun. Just don't go into the movie expecting something life-changing, because the only revolutions to be found here belong to a couple of tires.