One sentence synopsis:  The last of a legendary order of gunslingers and a boy from New York must stop an evil wizard from unmaking all creation. 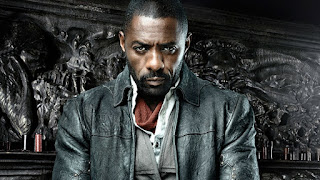 Things Havoc liked:   "The man in black fled across the desert, and the gunslinger followed."


Since it was first published in serial in 1978, people have been trying, off and on, to bring Stephen King's Dark Tower to the screen in some form or another. It wasn't until 2007 that active production began on what would become this film, with directors as varied as J.J. Abrams and Ron Howard being attached to the project, while the list of actors offered the role of the semi-titular gunslinger is too long to repeat here. One would have been forgiven for wondering if this Development Hell victim would ever wind up showing its face, but at long last it has arrived, a troubled production of a difficult property, but one with two excellent actors attached to play the leads.

Who am I speaking of? Why Idris Elba and Matthew McConaughey of course, taking on respectively the roles of hero (Roland of Gillead) and villain (The Man in Black). Neither role is all that well fleshed out beyond the basic character archetypes of epic fantasy literature, but both actors are supremely fun to watch working even in bad films, and remain so here. Elba is in his element as a world-weary gunslinger of legendary skill, a cowboy crossed with a questing knight, who wields six shooters the way Legolas wields his bow (and with a lot less pretty-boy annoyance). It's nothing revolutionary here, in fact it's pretty much Idris Elba doing a Clint Eastwood impression crossed with a standard fish-out-of-water story when he heads to New York and starts tipping hospital nurses with gold coins, but I'll be damned if Elba doesn't make the most of it. He doesn't make as much as McConaughey though, who gets the juicier role of playing Walter Padick, the Man in Black. I wasn't exactly sure what to expect from McConaughey as a villain, but this is pretty much the exact scenario I should have been envisioning, as McConaughey takes the Angus Macfadyen approach to villainy, constantly grinning at his own delicious evilness, as he seeks to do nothing less than destroy the universe by... you know I'm not actually sure what the evil plan at work here is, but it scarcely matters. McConaughey's black magic takes the form not of fireballs and special effects, but of whispered commands that vary from "kill each other" to "stop breathing", and unlike a lot of villains in movies like this, he is given free reign to kill more than just random passers by, decimating everyone and everything that crosses his path all while chortling to himself about how gloriously wicked he is. It's not the most subtle thing in the world, but it works. 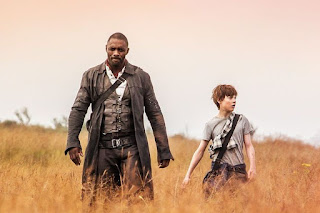 Indeed, subtlety isn't the strong suit of The Dark Tower in general, and believe it or not, that's a good thing. Most YA-style fantasy movies are quite pedestrian in their aims and ambitions, with the bad guys pushing the good guys through a hero's journey so standard that one can (and in the case of many a Hollywood film, has) write it all out by rote outline. It's not that Dark Tower is all that different in that regard, but that the film commits to its premise with more aplomb than most of its competitors do. Villains do not take people prisoner for no reason other than to grant the heroes a chance to save them, but instead outright murder everyone they come across, whether a traditional narrative would hold that character important or not. The backstory is not delivered in a massive narration dump, nor does the movie over-emphasize the one plot element that will turn out to be drastically important later on. Indeed, very little is actually established in this movie before it's actually used, which would be bad storytelling in any genre that was less formula-ridden than YA Fantasy, and which paradoxically actually turns this movie into a frankly surprising one at points. And if nothing else, it's the only movie I've ever seen which tries the old "buck up the hero at his lowest point with an inspiring speech routine" by means of giving an untrained teenager a gun to play with, as well as one of the very few whose moral is not that one should be content with the life one has, but that when one is given a chance to go do awesome fantastical things in another world, you say yes. 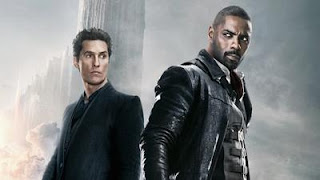 Things Havoc disliked: That all said, I don't want to give the impression that Dark Tower is some kind of fantasy masterpiece, re-inventing the genre for all time. Oddly enough for a movie called The Gunslinger, there's precious little action to it, and such action as there is is rather lackluster, as the Gunslinger simply shoots his enemies with unerring accuracy, while six thousand henchmen armed with machine guns fail to hurt him. I grant that guns are a fairly one-dimensional tool insofar as awesome action is concerned, but given the premise of a preternatural, divinely-gifted pistolier with weapons forged in crucibles of legend, surely anyone could come up with something a bit more exciting than "shoot a guy, then shoot another guy."

But it's the writing, the Achilles' heel of these sorts of works, that really lets the side down, something which makes the decision not to give the writing much time to showcase its poverty a bit more context. Backstory elements that seem like they ought to merit an explanation or two are simply dropped onto us for no reason at all, particularly a sudden and baffling reference to Arthurian mythology that lands out of nowhere and is never mentioned again. More seriously though, the film commits the unfortunate (and commonplace) sin of having characters explain things to other characters that they already know for the benefit of the audience. Obviously, given a seven-book series famous for its labyrinthine, interconnected mythology, and the need to condense it into a workable two=hour film, certain liberties have to be taken, but there's never an excuse for clunky writing, no matter what the structural pressures the source material layers upon you. References to other Steven King works such as It or the Shining go well beyond the level of easter egg and are catapulted into major elements of the plot with no explanation, confusing what's actually going on for anyone who's seen a movie in the last thirty years, and the unevenness of the script combined with the aforementioned sparseness of detail gives the film a rather arbitrary feel, wherein we get the impression that things happen because the filmmakers made something up at lunch and shot it. 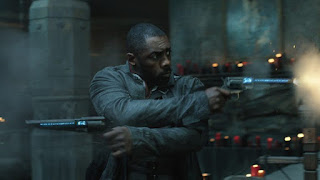 Final thoughts:   I have to admit that my original review of Dark Tower, the one I was formulating in my head as we walked out of the theater, was considerably more critical of the film's flaws, but over time, I've softened on it considerably, partly because all of my viewing companions liked it more than I did, and partly because I realized that the movie it reminds me of the most is 2012's epochal failure, John Carter, the greatest box office disaster in the history of Hollywood. Like Dark Tower, John Carter was a flawed movie, but one that had considerable virtues to it, mostly to do with the cast (Taylor Kitsch notwithstanding), and the overall pulp-irreverent feel of the thing. So many bad movies compound their mistakes by taking their source material over-seriously, while John Carter, and The Dark Tower like it, accepted the fundamental oddball nature of the story they were trying to tell, recognizing that epic fantasy has to be taken in its own terms, and doing just that. As such, while Dark Tower is no masterpiece, it's actually not a bad rendition of a legendarily un-filmable property. It's true that my native sympathy for actors like Idris Elba and Matthew McConaughey probably slants my opinion somewhat, but then again the whole point of an exercise like this one is to identify actors and concepts you like, and then go see them.

And if nothing else, rest assured that at least this one's better than Maximum Overdrive.

Next Time:  Robbing NASCAR, a Steven Soderbergh story.
at September 04, 2017