One sentence synopsis:  An MI6 super-spy is sent to 1989 Berlin to extract a Communist dissident with a list of undercover agents.


Things Havoc liked:   And so begins the John Wick ripoffs! 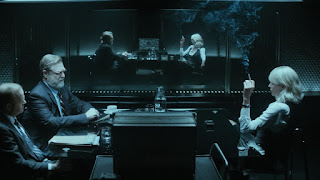 Well, actually, let's be honest. John Wick ripoffs have been a thing for a while now, pretty much since the original John Wick came out back in late 2014. Movies like The Accountant and The Equalizer have been gleefuly stealing a page from John Wick's handbook, to say nothing of the sequel itself, and frankly, I'm all for it. I once famously predicted that Action movies were "over", right before a whole slew of them came out and proved how wrong I was. Not all of this new wave of action films used John Wick as a model but a lot of them did, and why not? John Wick was a breath of fresh air in a stale genre, a move away from the ugly, grimy dictates of shaky-cam into a more stylized and cinematic style of action filmmaking. Not all of the movies made in this style have been any good (The Equalizer was largely a waste of time), but the style itself has earned my attention, and throwing one of the biggest female action stars of the day into one of them was the sort of thing destined to make my film schedule, particularly when the director of the affair is David Leitch, a former stuntman whose directorial debut, all the way back in 2014, was John Wick itself.

Atomic Blonde stars Charlize Theron, the most beautiful woman in the world, of Snow White and the Huntsman, Fast and Furious 8, and Mad Freaking Max (to name only her recent works). I was sold on this one from the word go, as a result, and as far as Theron is concerned, that was a wise decision. Theron is no stranger to action films, of course, nor to inflicting tremendous punishment on herself in order to make them work, and her credentials as an actress have never been in doubt (she won an Oscar for Monster, after all). Theron's character, a late-cold-war spy and ludicrously dangerous killer, is rather thin on detail, but Charlize has so much native charisma that she can take the "tough, monotone badass" interesting to watch despite the paucity of actual material. And she is ably assisted in this one by her supporting cast, including James McAvoy as a gallivanting British spymaster (and drunk), John Goodman as a CIA handler (doing his best avuncular semi-asshole routine), and everyone from legendary character actors James Faulkner, Toby Jones, and Til Schwieger to ubiquitous Algerian badass Sofia Boutella in supporting roles. I will be the first to admit that these guys don't always have a lot to work with, but they're an exalted group of cinematic veterans, and it's fun watching any of them doing anything at all, to be honest. 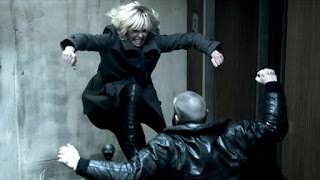 But John Wick and its imitators are not character-heavy dramas bursting with human interest, they are action movies, and the action in Atomic Blonde is what the movie has to stand on. We'll talk more about the action overall in a moment, but the quality of the work here is superb, by and large, hinging in particular around a showstopper of a long-take sequence in which our heroine has to battle six men inside a Berlin apartment building, a battle which lasts at least six minutes, and spills through corridors, stairwells, and into vacant apartments. Not only is the sequence a masterpiece of action filmmaking, something that should be beyond question with someone like Leich at the helm, but it is a masterpiece of how to shoot a female action lead, as with the exception of a few action movie suspension of disbelief staples (like the fact that anyone can keep fighting after having been thrown down a flight of stairs and struck in the face with a lead pipe), the movie showcases the myriad ways in which a 120-pound woman might well try to fight six men who are each twice her size and weight. The sequence begins with precise, brutal martial arts, and ends with two combatants so exhausted and beaten that they can barely stand, grabbing desperately at corkscrews and shards of crockery to try and stab one another's eyes out. It's marvelous.

Things Havoc disliked: The rest of the film is not.

John Wick for those who don't remember, was a seminal work of action filmmaking, but part of the reason for that was its laser focus on the action and the style. Its plot was so throwaway as to be a joke, a single invincible killing machine wreaking death and vengeance on his enemies for the slight of having stolen his car and killed his dog. Atomic Blonde, on the other hand, based as it is on an Antony Johnson graphic novel (unread by me), tries to be much more than just a grindhouse-style action fest, and in doing so, more or less screws the whole enterprise. Absent that one, stellar action sequence, the movie is almost entirely bereft of major action, instead concentrating on its plot, a labyrinthine, inchoate mess of espionage and double crosses that seems poorly thought out and barely coherent. Characters double and triple cross one another left and right, occasionally seeing through one another's intended double crosses, all without letting the audience actually know what is happening, with the result that most of the film, we spend in a complete fog as to what is happening and why it is doing so. Several times, I thought that one major character had been established as having betrayed and attempted to murder Charlize Theron, only for the characters to pretend that nothing had happened, until all of a sudden they ceased to do so for no discernible reason. This all wouldn't matter so much if Atomic Blonde were a typical action movie (the plots for which are usually thinly-veiled excuses for the action), but this film wants so desperately to be taken seriously as a spy thriller in the style of a John LeCarre novel that it spends most of its run-time laboriously running through the motions of backstabs and betrayals by characters we know nothing about in the background of a grey, grimy city. I'm not saying that all action movies have to be brainless, but the core tenets of LeCarre films like The Constant Gardiner or Tinker, Tailor, Soldier, Spy are that spy work is not a matter of gun battles or action setpieces, but boring, mundane work performed by dumpy, middle-aged men with no particular combat aptitude. This sort of thing clashes dramatically with high-powered luxury-and-assassins style Bond escapades, created as it was to refute the mythos of the Super-spy as a dashing womanizer with high-tech gadgets and superb fighting skills. Trying to merge the two together creates nothing but a giant mess. 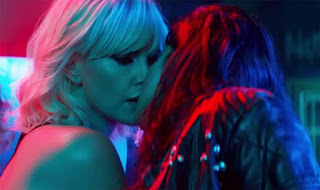 But fine, tone and plot are not what you go to see this movie for. Unfortunately, the film spends so much time on the tone and plot that there's not much room for anything else, not even for the action, which absent the one sequence referenced earlier, is pretty much a complete bust. A handful of brief and un-inventive action sequences, sprinkled throughout the plot as though keeping to a timetable, are all we have to look at between bouts of Charlize Theron wandering rather aimlessly through Berlin in search of this informant or that Macguffin. The filmmakers attempt to raise some interest by providing a lesbian subplot between Theron and Sofia Boutella, playing a young French spy caught up in the middle of this tangled web, but the sequence, for all its progressive credentials, seems entirely pointless, as though it was felt that if Bond has a sexy female spy to fall in with, then Theron must as well. Theron and Boutella share no real chemistry, an achievement of sorts given their respective pedigrees, and Boutella's character serves no purpose that I was able to discern in the movie at all. She's not the only one to suffer that fate. Indeed, it's probably not a co-incidence that Kurt Johnstad, writer of this gnarled mess, made his bones on the epochal 300, another graphic novel adaptation that had an exceptionally simple plot, preferring to focus the movie entirely on narrative and visual artistry. Making a similar choice might have saved this movie, but we shall never know.

Final thoughts:   Atomic Blonde is by no means an awful film, but it is a pretty lackluster one all told, not smart enough to be a proper spy thriller, and too obsessed with pretending it is smart enough to be anything else. I've got nothing against incoherent films if they have compensating virtues, but Atomic Blonde almost entirely lacks these, and the one good action sequence and the prospect of watching Theron parade around East Berlin in thigh-high boots is not enough to retain interest across the board. By the end of the movie, long after I had worked out who was probably going to wind up on whose side based on the time-honored ratio of screentime to billing rank (I have been going to the movies for a while now, folks), I was prepared to simply write this one off as another misfired action film with intellectual pretensions, and that position has not shifted in the days since I saw it.

Still, if all you want to do is watch a bunch of good actors play off one another for a couple hours, I suppose Atomic Blonde is a harmless diversion. For my money though, I'd suggest looking up the one great scene on Youtube, and finding something else to do with twelve dollars and two hours.