One sentence synopsis:  Deadpool must save a mutant boy from being killed by a time-travelling bionic commando named Cable. 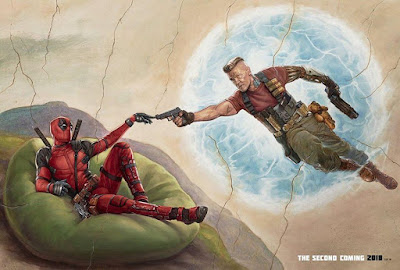 Things Havoc liked: 2016's Deadpool was a goddamn miracle, even in this era where superhero movies have conquered the world, primarily because it was about a character that should have been unfilmable, given the fourth-wall-shredding madness that it customarily came with. And yet somehow, by the grace of God and Ryan Reynolds, they pulled it off, producing a madcap lunatic movie filled with all of the raunchy humor and general narrative absurdity that one should properly think of when one imagines "Deadpool: The Movie". Having drastically outperformed expectations, it is only fitting that the film be rewarded with a sequel, so here we are.

So how is it? Well... it's good! Primarily because Ryan Reynolds is still in it, and Ryan Reynolds is still awesome. There was a consensus among friends of mine that Ryan Reynolds, despite all the awful movies he made a habit of making (Blade 3, RIPD, Green Lantern, X-Men Origins Wolverine...) was not a bad actor, but simply one who was waiting for that one movie that he would make, to make everyone fall in love with him again. I don't know that anyone except him thought that Deadpool would be that movie, but it's a personal labor of love for Reynolds (he co-wrote the thing this time), and it shows. Reynolds is just as perfect for this round as he was before, indeed his performance is slightly more subtle than it was, imbuing Deadpool with a bit more of a settled, cool affect. There were moments in the last movie where I felt that the film was trying a bit too hard. There are no such moments this time. 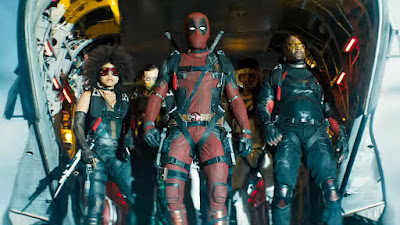 All the old favorites from last time are back. Collosus (Stefan Kapičić), Blind Al (Leslie Uggams), Negasonic Teenage Warhead (Brianna Hildebrand), and Weasel (TJ Miller, who will likely not be appearing in the third film after getting caught calling fake bomb threats in against New York trains). But there are also a number of additions, foremost among them Josh Brolin, whom we last saw like two weeks ago in another Marvel film, this time playing the time travelling cyborg Cable. All of a sudden, I've become a huge fan of Brolin's, thanks to the incredible work he did on Infinity War. This round isn't quite as demanding, as Cable is basically a foil to Deadpool's insanity, but Brolin, as it turns out, is an incredibly good straightman to the antics of the Merc with a Mouth. Cable joins the cast by virtue of traveling back in time to slay a dangerous mutant who will one day do horrific things, the mutant in question being Firefist (Hunt for the Wilderpeople's Julian Dennison) a pyrokinetic kid stuck in a horrific situation, whose bitterness at the abuses he has suffered threatens to boil over into a cataclysm of pent-up frustration and rage.

Oh I'm sorry, did I forget to mention the themes of child abuse and murder that are riven into Deadpool 2? Because it's there, alongside a bunch of other heavy stuff, like suicide, depression, the pain of loss, and so forth. Why is all of this present in a madcap comedy? Because Reynolds and his co-writers (Paul Wernack and Rhett Resse, returning from the original) understand that the strength of the original Deadpool was that it wasn't a straight comedy, but tempered with a great deal of relationship drama, well-excuted relationship drama at that, which cut the insanity just enough for your average moviegoer (or your above-average movie critic) to get into the movie without being put off by a world without rules. Deadpool 2 doubles down on this concept, using its lunacy to get into some heavy topics, and coming off reasonably well across the board for all that. Family-style drama is hard to play straight, and yet ironically, it's Deadpool, Deadpool of all movies that pulls it off in a superhero context, better than practically any film I've ever seen. And it's not like this isn't tried, for half the superhero movies out there involve characters forming a surrogate family, and almost none of them do it as well as Deadpool does, in between the shirtdick gags and the R-rated ultraviolence. 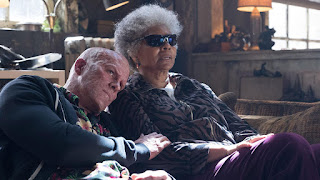 Things Havoc disliked: Sooo... do y'all know what "Fridging" is?

"Fridging" is a term invented about twenty years ago by Comic author Gail Simone (a former writer of Deadpool), a trope found in comics whereby a female character is murdered, injured, or otherwise thrown out of the story so as to make the male character she is closest to sad, vengeful, or enraged. It's a veeery common trope in comics, and it is regarded, generally, as a lazy one (to say nothing else), a cheap way of generating pathos whilst robbing the audience of a potentially interesting character. Not every character who gets fridged is an interesting one, of course (one could argue that John Wick's dog got fridged, and nobody batted an eye there), but some of them are, and in Deadpool 2, the one that gets hit with the refrigerator is arguably one of the best characters from the first movie, Morena Baccarin's Vanessa.

No, I'm not giving the movie away, this literally comes before the opening credits, nor is the fridging standard by several metrics (which I shall not go into), but the fact is that one of the best things from the first movie is cashed out just to provide a bit of plot motivation for Deadpool himself, and that's just lazy goddamn writing right there, and there's no other way to put it. Fridging is a contentious subject among pop culture critics, and one that I have no interest in diving down, but on a narrative level, the point of writing characters out of a story is to get something out of it, either audience shock or narrative development, or yes, character growth from the remaining party members, and the return on investment that Deadpool 2 gets from shock-eliminating one of its strongest elements from the last time around is grossly disproportionate for what was given up. Deadpool is a character that can evolve any way the writers want, he's literally insane for God's sake, and the writers have shown themselves more than capable of evolving him along the razor's edge of what the film can support, and it strikes me, both now and as I was watching the film, that this was the first-draft response, and that no additional thought was put into it.

Neither am I impressed by the film's attempts to replace Vanessa with a brand new super-kewl character that we are supposed to care about (I SAID CARE ABOUT THEM DAMMIT) by the name of Domino (Zazie Beetz). I've never liked Domino in the comics or out of them, as the character's shtick (preternatural luck) means that there is never any meaningful tension as to whether or not she will get out of a situation, nor any reason to cause her to have to exert herself in any way, as lady luck will come to her rescue automatically. It's like if Death from the Final Destination universe were to come to life as an actual character, it's a character built on contrivances and narrative convenience, it sucks. And the screenwriters knew it too, because they basically stop the movie for ten minutes so that we can all bear witness to how awesome Domino is, how amazing it is that circumstances arrange itself for her to give no shits because she's protected by narrative fiat. This is the mark of an insecure screen element, and even if it were not, detatched apathy is a sensibility that only works in limited circumstances in movies, and certainly not in your epic superhero tale that is trying desperately to convince you has a heart.

Ultimately, all things being equal, Deadpool 2 just isn't as sharp as Deadpool 1 was. The jokes are just a little more forced, the action just a little more rote, the sentiment just a little less real, the writing just a little less expert. We've already proven that Deadpool can exist in his own movie, somehow, and so a bit of let down was probably inevitable, as the shock of just what Deadpool is has worn off a little bit. Still, there was unquestionably a part of me that hoped that the magicians who managed to put the original together in defiance of all common sense, might have been able to avoid a sophomore slump. 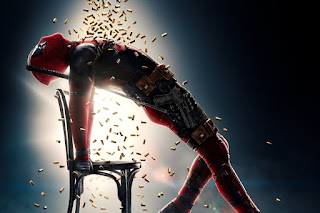 Final thoughts:   I don't want to give the wrong impression here, for Deadpool 2 is, ultimately, a good movie, one that I enjoyed, and one that I wholeheartedly recommend to anyone who liked the first film. In a way, it is lightning striking twice, a return to the well that yields water almost as sweet as the first draught. That the movie ultimately relies on narrative tropes that are dated and tired to get its point across prevents it from being great, but not from being good, nor from being a worthwhile watch to anyone interested in the Superhero film as an art form.

Oh, and incidentally, Deadpool 2 has the greatest mid-credits sequence of any movie ever. That sequence alone earned it another half-point.
Final Score:  6.5/10