One sentence synopsis:  Han Solo tries to escape a dead-end life of poverty and gutter-running on Corellia by joining up with a crew of thieves and outcasts from across the Galaxy. 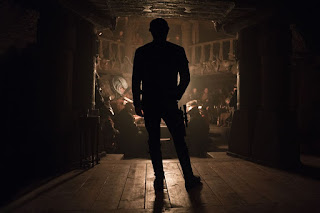 Things Havoc liked: I was not a big fan of Rogue One, Star Wars' first foray into the standalone movies that they were establishing separate from the mainline continuities, mostly because the movie, while interesting enough in theme and style, had way too many characters and not enough time to establish any of them. I was consequently not entirely enthusiastic about the prospect of a solo Solo movie , as the trailers were underwhelming, and the idea rather obvious, I thought. I try not to let rumors of production madness affect my judgment on films, but there was that as well, with directors being fired for not doing what the studio wanted and other directors and actors being hurriedly hired to fix things in post. All this together produced a movie I had little expectation for, and went into figuring that, whatever happened, at least it was unlikely to be Attack of the Clones.

So, was Solo any good? Well to my surprise, yes. Yes it was. Not great mind you, but still quite good, better than I expected it to be given the combination of rumor, hearsay, and scheduling that was being leveraged against it. And the primary reason for all of this, as so often, is the cast.

Alden Ehrenreich, an actor I have seen in Hail, Caesar, and little else, is tasked with somehow trying to replace Harrison Ford in the titular role, and while I was skeptical of such, he manages actually fairly well with the role. Is he better than Ford was? Of course not. But he manages to be recognizably Han Solo, albeit a younger, less cynical version of our favorite roguish scoundrel, and that's more difficult a task than it appears to be. He's assisted by a secondary cast that overall manages well, including Emilia Clarke, Danarys Targarian herself, as Qi'ra, a fellow gutter runner from the slum planet of Corellia, who manages, like Han, to somehow work her way out. I've not been a fan of Clarke's non-GoT roles in the other movies I've seen her in (the execrable Terminator: Genesys being the first to come to mind), but she's actually pretty decent this time around, sharing workable chemistry with Ehrenreich, and avoiding the stone-faced routine that she's usually engaged in with her other roles.

No Solo movie would be complete without a cast of ruffians, rogues, thieves, and gangsters of course, and by and large the film fills itself with a good catalogue thereof. Woody Harrelson, who has increasingly become an actor I look forward to as he's gotten older, plays Tobias Beckett, an older smuggler and criminal who winds up taking the younger Han under his wing and into his crew, comprised of Thandie Newton and a four-armed alien creature played by Jon Favreau. Despite limited time to set up and get to know these characters, unlike in Rogue One, we get a good sense of camaraderie and lived-in understandings, and a clear sense of the world and place these people fit into, even as the cast swells with the addition of everything from a revolutionary droid-rights activist, to Chewbacca (Joonas Suotamo, who has been playing the character in the new films, and with whom Han's relationship works very well), to Paul Bettany as a last-minute addition to the cast, playing the requisite crime syndicate leader, lording his power over everyone, partying and killing with equal efficiency, and snarling at people constantly in the best Jabbaesque tradition. Bettany doesn't do much beyond reprise his performance in Legend with a few extra scars on his face, but it works. 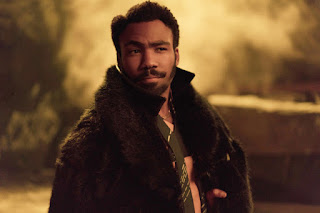 The best thing in the movie though? Donald Glover, Childish Gambino himself, an actor I've never liked (though I am assured this is because I've not seen him in the correct roles), but who is absolutely spot-on perfect as a younger Lando Calrissian. Unlike Han's grubby background, Glover plays Lando as a conman and cardshark, a charming gambler with a rakish side to him, the sort of man who can both handle a blaster and keep a wardrobe full of half-capes at the ready, because a man must look stylish to play the proper part. Glover has everything down, the cool, charming affect, the Billy-Dee Williams cadence, the magnetism of a character who was once the only black guy in the galaxy. It's a performance good enough to convince me that I was probably wrong about Glover the entire time, that his role in The Martian was a fluke of bad directing or something, and that he's an actor to watch moving forward. 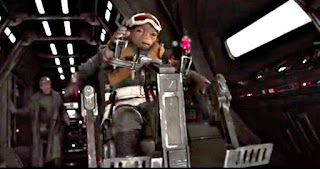 Things Havoc disliked: The plot of Solo is nothing to write home about, for all the twists and turns that it takes. Aspirational kid gets out of bad situation, gets in trouble, gets himself out of trouble, finds more trouble, etc etc... It's not done poorly done or anything, and indeed there are some sequences that are fairly inspired, such as a quiet heist that gets turned into a massive revolution almost by accident. Overall though, the film is fairly formulaic, and gets moreso as the movie continues. And that's something of the problem. 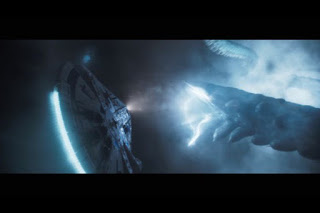 You see, Solo was supposed to have been directed by The Lego Movie's Phil Lord and Christopher Miller, a superb directing team who have already once struck gold with a movie that had a pretty standard plot to it. For whatever reason, this arrangement failed, and Lord and Miller were taken off the project and replaced by Ron Howard. Though Howard is one of the finest directors working, he was brought late into the project, had bare weeks left to shoot and reshoot key scenes, something not helped by having to re-cast major characters and hire acting coaches for others. Don't get me wrong, Howard did a credible job, but the seams between what he put together and what Lord and Miller did are obvious and visible, and result in the movie being both overlong (two different plots have to be established one after the next), and possessed of a weak third act that seems a let down from what came before it.  Howard, after all, is a very good but very "safe" director, whose sequences are also exceedingly "safe", relative to what came before it.  I don't blame Howard for this at all, mind you, nor veteran editor Pietro Scalia (of Gladiator, Kick Ass, and Black Hawk Down). They did the best they could with the circumstances they were handed. I blame whatever studio shenanigans resulted in this decision being made in the first place, because for all Howard and Scalia's efforts, the film left me wanting to watch the rest of Lord and Miller's version, as that one promised to be much more interesting than what we ultimately got. 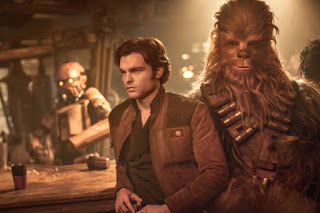 Final thoughts:   Still, I can only get so angry at a movie for failing to be as good as the Lego Movie, and despite its patched together state, Solo is actually a pretty damn good little film, entertaining throughout and palpably fun in a way that bad Star Wars media is not. Neither weighty like the new films or Rogue One, nor stupid like the prequels, it stands as its own thing, a partial (and conditional) vindication of the concept of the Star Wars anthology series, good enough at least to warrant a look, and to justify its existence. I'm uncertain if there are more sequels to Solo in the offing, the film hints at possibilities at the very least, but given what we have here, I'm at least open to the possibility.

If nothing else, it's a better idea than the Boba Fett: Origins movie they've continuously threatened to make.

Next Time:  June is a stacked month.  What say we start things off with a little bit of Horror-Comedy?
at June 02, 2018