Alternate Title:  That Explains the Laser-Raptors

One sentence synopsis:  Claire Dearing and Owen Grady attempt to rescue the dinosaurs of Isla Nublar from an impending volcanic eruption. 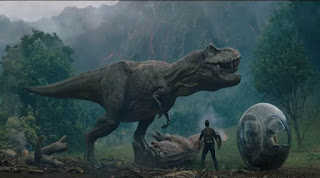 Things Havoc liked: To hell with both haters and critics, I liked Jurassic World, stupidity and all. I liked it because it was fun and adventurous and enjoyable to look at and managed to avoid pissing me off too terribly much. A lot of people did not like it, for they felt it exemplified all of the opposite qualities above, but nevertheless, the movie contrived to do almost everything that a Jurassic Park reboot could be expected to do, given that we no longer live in an age where a nearly-photorealistic dinosaur can alone be expected to sell a ticket. And so, while the trailers did not give me a lot of reason to hope, the fact that I did like the previous incarnation of this series, combined with the fact that Corvidae, my partner in crime, adores anything with dinosaurs in it, I felt I had to see this one. Besides, the worst-of-the-year list isn't going to fill itself.

I kid, I kid. Fallen Kingdom, despite doubling down on the previous movie's stupidity, is actually a pretty good film. Nothing great, nothing earthshattering, but a better movie than I anticipated it being, and the reasons for that vary considerably. Some of the credit belongs to the actors, particularly Chris Pratt, who continues to be an enjoyable leading man in most every film I've seen him in, and who manages to be considerably less of a douche in this film than he was intended as being in the previous. Newcomers to the series, particularly Justice Smith as an IT technician wrapped up in a situation far beyond his pay grade, Toby Jones (of the Captain America series) as an arms-dealer/auctioneer to the morally bankrupt, or Ted Levine (Buffalo Bill from Silence of the Lambs), as a great white hunter sent to oversee the operations on the island, all liven the film with their performances, Smith as a terrified college student, Jones as a sleazy mega-capitalist, and Levine as... well Levine as only Ted Levine can light up a role. Even Bryce Dallas Howard, whom I've never liked, improves on her showing this time around, though I still won't go so far as to say she's good. Some of the credit also belongs to the effects-work, which is stellar as always, showcasing us dinosaurs in all their glory and the myriad ways in which they ruin foolish humans' days. The art department, or whatever they call it these days, also deserves quite a bit, having once again turned much of Hawaii into the lush, insane death-trap that is the original island, or for outfitting the absurd Edwardian mansion/mad science facility that the climax of the movie takes place in. 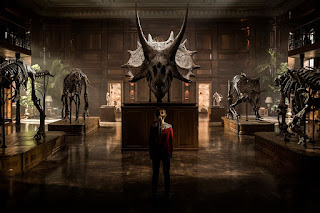 But the majority of the credit for the non-suckitude of Jurassic World 2 belongs to Spanish director J. A. Bayona, of The Impossible and A Monster Calls.  Bayona, who was given the reigns of this one after Colin Trevorrow left for greener pastures, actually puts in a highly effective turn with this one, framing and shooting the movie with just the right balance of callbacks to the original films without ever devolving into kitch, with an arsenal of effective and tension-building long-take sequences, particularly a brilliantly-paced one involving a mass stampede and a subsequent sudden trip into the ocean, and a generally effective use of space, scene, and timing that is well beyond what a cash-in movie like this generally receives. I cannot pretend that I'd ever heard of Bayona previously, but I have to give props where they are due, it's one of the best directorial efforts I've seen since Infinity War, and it marks him out as a director to watch out for in the future. 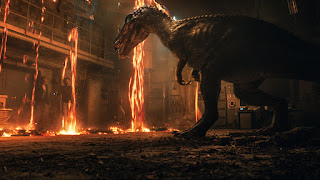 Things Havoc disliked: None of the credit belongs to the scriptwriters.

Jurassic World was a stupid movie, but it knew that it was stupid, and played with its premise in a way that felt fun and interesting. Fallen Kingdom on the other hand stretches our patience with such things to its breaking point, finding yet another way to posit that weaponized dinosaurs are something that a good many someones with a lot of money feels is a good idea. Some of you may have thought that my little alt-title up above was a pure joke, but I ask you in this case, in what world does it make more sense to breed and train a dinosaur to kill anyone who has a laser pointer aimed at them, than it does to attach said laser pointer to a gun and shoot the people you train it upon directly? I am reminded of the scene in the Jackie Chan movie, The Tuxedo, in which a villain devises a secret, multi-billion-dollar compound which, when injected into someone, kills them via nanobots. Roger Ebert famously asked if there was a reason that injecting them with arsenic was not good enough, given the intent. 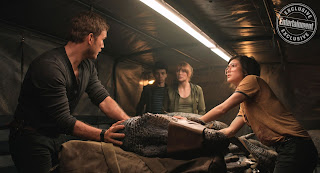 But back to Fallen Kingdom, which is a very stupid movie, involving very stupid decisions on the part of very large portions of the cast. I'm not talking about the basic fact that every single interaction with these dinosaurs on the part of anyone has resulted in catastrophe, there does need to be a movie after all, nor am I objecting to the movie's premise of a de-extinction rights campaign on the part of well-meaning environmentalists who wish to save the dinosaurs from their impending extinction. What I object to is the fact that, for the roughly fifth time in a row in this series, the heroes walk into the middle of a PMC camp staffed by grizzled, amoral mercenaries, and assume that all is to be comprised of peace and love. It's not that the moment-to-moment stuff is terrible, it's not, we're not in a horror movie here, but the plot is so irretrievably stupid that we can predict the entire thing by simply asking ourselves "what decision would the characters have to make to maximize the number of large teeth they are likely to encounter in the near future", and then watch as our wildest fantasies are realized before us. 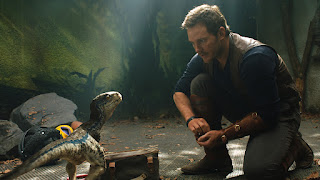 Final thoughts:   Honestly, while Jurassic World: Fallen Kingdom is a very dumb film, I actually expected it to be worse, assuming that the acting would be terrible, or the directing sloppy, or the effects sub-par, or the plot even dumber than it turned out to be. Given that none of the above actually happened, I'm actually in a rather awkward position vis-a-vis Fallen Kingdom, in that despite how dumb it is, I have to admit that I... actually kinda liked it, and I think that most people who go see it might find they like it as well.

If you demand that all of your movies be intellectual in nature, then you must at all costs avoid the latest Jurassic World movie, but if you're willing to turn off your brain and just watch some interesting characters go through a romp with a bunch of dinosaurs (or if you find the baby dinosaurs insufferably cute... as I and all those with a soul do), then I think you might find something to like, even in a movie as dumb as Fallen Kingdom.