One sentence synopsis:  A prohibition-era gangster juggles morality and vengeance while trying to take over the liquor trade in 1920s Tampa. Things Havoc liked: The career trajectory of Ben Affleck makes no sense when you think about it. A blockbuster actor who came to prominence thanks in part to the coattails of his friend Matt Damon, Affleck's career was thoroughly and convincingly annihilated over the course of the early 2000s by a series of disastrously-bad films such as Pearl Harbor, Gigli, Daredevil, and Surviving Christmas, until by mid-decade he was reduced to playing 17th-billing in the forgettable Joe Carnahan comedy, Smokin' Aces. And yet despite this, over the next ten years, Affleck dragged himself back into box office and critical prominence primarily through his directing escapades, making Hollywoodland, Gone Baby Gone, The Town, and finally 2012's Best Picture winner, Argo (which didn't deserve that honor, but was still a very good film). Though he's had his share of critical catastrophes since then (the man was in Batman v. Superman for God's sake), Affleck has re-invented himself as a superb actor-director, such that I've been forced to promote him to the rarefied ranks of directors whose output are automatically interesting to me. And so when he came up with a new film directed by and starring himself, promising guns, glitz, and dames in the roaring 20s, it seemed like a great place to start off 2017.

Plus, it's January, and the alternative was a Shyamalan movie.
In the middle of the gangster-and-booze-soaked prohibition years, Joe Coughlin (Affleck), a WWI vet who lost all sense of idealism in the trenches, desires to make himself a free man by any means necessary, even if that means skating the line between rival Irish and Italian mobs in Boston and across the East Coast. Of course playing both sides against the middle isn't a strategy calculated to work long-term, and following a series of disasters and violent encounters, Joe is forced to choose sides and dispatched south to Florida to take control of the liquor trade through Tampa and up the East Coast, engaging not only with rival mobsters but with the local efforts of the Klan as well, who are not terribly enamored with the notion of a bunch of Irish and Italian catholic mobsters showing up to do business with the Cuban and Dominican gangs who run the speakeasies and smuggling routes. We are therefore treated to scenes of mafiosos massacring members of the KKK, which always brightens the day. 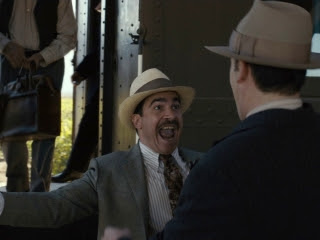 Affleck is a serious director nowadays, and serious directors can attract serious star power to their films. Thus in this movie we have Brandon Gleeson, playing Affleck's quintessentially irish Police Captain father, who despairs of his son's chosen profession, but greases palms when necessary to keep him out of terrible trouble. We have Chris Cooper (yes, Chris Cooper is in this), and Ellie Fanning playing father and daughter, the former a sheriff in the Ybor neighborhood of Tampa where all of this goes down, the latter his would-be actress of a daughter, who falls instead into heroin and prostitution before finding Jesus and becoming a firebrand revivalist on a moral crusade to abolish drinking and gambling, items the mob have some interest in. Neither of these roles are particularly nuanced, but Cooper in particular is very very good, both as a desperate father with no answers but the bible and as a pragmatic sheriff who understands that his town's primary industry is bootlegging, and that accommodations must be made with those who engage in it. Veteran English actor Robert Glenister plays an Irish mob boss with whom Affleck fights an on-again, off-again war, portraying his character like something out of the Book fo Revelations, quoting aphorisms as he scummily prepares to obliterate all of his enemies. But the best role of all belongs to a relative newcomer, character actor Chris Messina (formerly of Argo and The Newsroom), who plays Affleck's partner in crime, Dion, as a womanizing, live-while-you-can New York gangster who accepts the life he has and holds no illusions as to what it promises in the future. "None of these men expected to see old age," he says at one point, shrugging off the killings that his gang has just engaged in. "Neither do I."


Things Havoc disliked: If only Affleck were as good, we might have had something here.

Ben Affleck is not a great actor, but he is a very good actor, which is why I'm surprised to report that he is not very good in this picture, a movie that requires that he play a bundled, quiet man who periodically explodes into displays of terrifying violence. This is the sort of thing his brother Casey, who is a great actor, excels at. Ben, meanwhile, chooses to simply adopt a straight-faced monotone for the entire picture, along the lines of Tom Hanks' portrayal of a similar character in the 2002 Sam Mendes gangster flick, Road to Perdition. And like Road to Perdition, the result is to deaden the film (something I believe was done intentionally in the former movie), save that this time, the resulting tone is at odds with the glitz-and-glamour stylings of everything else going on. Affleck becomes fantastically successful in Tampa, winding up the most powerful mobster in the entire state, meets and weds the sister of the local Cuban mafia (Zoe Saldana), and prosecutes his campaign of vengeance against Robert Glenister's Irish devil, all while wearing an expression better suited to a man attending his mother's funeral. And given that Affleck is both directing and starring in the movie in question, it's not like the film can shoot around him or anything.

The movie also feels very choppy, as if cut down from a much longer, and likely better film. Many of the prominent events of the movie are established in voiceover montage sequences, following which we appear to be in a completely different movie in terms of tone and shot selection. At one point the film is a full-throated gangster flick with action, hedonism, and the luxurious benefits of a life of sin and crime, and then all of a sudden we're in a bittersweet mediation on mortality and ethics. A good movie can contain many elements of course, but this one just randomly seems to shift courses, pulling out of nowhere the notion that Joe is a good man fallen in with bad people, when we've never previously had any evidence of that. At one point, Elle Fanning's character tells Affleck that her father (Cooper) respected him once upon a time, a bit of information it would have been nice to see beforehand in their previous dealings, but which comes as a complete surprise to anyone who has seen the previous hour and a half or so of film. And so we move on, bouncing from one idea to the next, with the excellent actors in the cast doing what they can to make all these shifts of tone and theme make sense, while everyone else just waits for their scene to be over so that they can die offscreen. 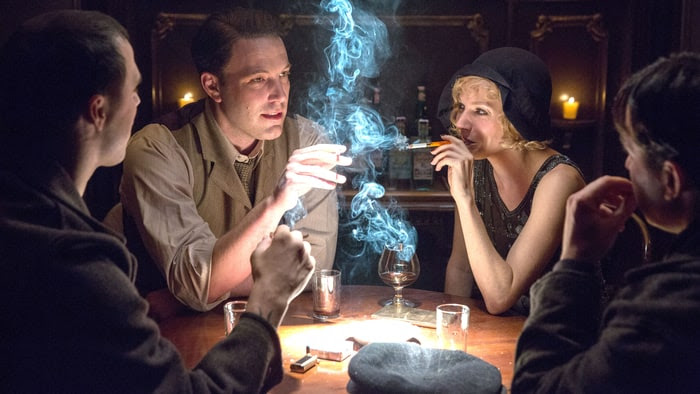 Final thoughts:  Bilge Ebiri, movie critic for the Village Voice, said that "somewhere inside the 128-minute Live by Night is a reasonably solid 168-minute movie struggling to get out," and I agree completely with this assessment. Live by Night is certainly not a bad movie, and some of the gyrating elements coursing through it are actually quite decent, but it lacks the sure-handed structure of Affleck's previous works, and feels like a film mutilated on the editing machine into something halfway watchable. Whether that is because the original story didn't work at all or whether it was cut down to meet a timeslot, I could not tell you, but while the resulting film is halfway decent, it's not up to the level we've come to expect from Ben Affleck's directorial work. And that, right there, is a statement I never saw myself writing back in 2003, when I walked out of Daredevil.

Next Time:  Time to look back to a period when 'computer' was a job description.
at January 29, 2017