Alternate Title:  The Hero we Need

One sentence synopsis:   Batman struggles with attachment issues relating to adopted-orphan Robin, newly-minted police commissioner Barbara Gordon, and long-suffering Alfred, even as the Joker plans to unleash a horde of the worst evildoers in all of fiction.

Things Havoc liked: Of all the staggering surprises I have experienced in my years of watching movies for this project, very very few have been as astonishing to me as 2014's Lego Movie, a film that seemed like it was to be the children's version of Battleship, and turned instead into the best film of 2014. The reasons it did this were complicated, and likely best summarized by reading the review in question, but foremost among the qualities that movie presented were its sense of infinite wonder, its frenetic pace, and its complete and utter disregard for things like canon and continuity.

So how fares its sequel? Well... two out of three ain't bad, folks.

The Lego Batman movie is a very good film, bordering on an excellent one, a film that is directly in the vein of its predecessor with a similar sense of irreverent insanity and disregard for the super-serious canon that Batman, and other such superhero properties, have built up for themselves. Replete with in-jokes, references, and ballistic-grade visual gags, the movie is energetic, off-the-wall, and a lot of fun, simultaneously the most and least loyal film ever made to the tremendous backlog of Batman's history. I wasn't sure, going in, how in the world you could possibly follow up on something as... strange... as the Lego Movie, but this is hardly the worst idea that they could have come up with. Well done.

The list of voice actors that populate The Lego Batman is long enough to serve as its own review, so suffice to say that the film involves Batman's (Will Arnett) first encounters with such series staples as Dick Grayson (Michael Cera) and Barbara Gordon (Rosario Dawsom), who in this film are portrayed respectively as a heartwarming orphan in the traditional sense of the term, and an analytics-based police officer who intends to put Batman out of business through the novel approach of actually doing policework. This Batman, who is both entirely the same and completely divorced from the previous incarnation of the character, is intended to be a send-up to the character, a meat-headed dude-bro obsessed with his dead parents and with how effortlessly awesome he is, whose reaction to change is uniformly negative, and whose comfort level beyond the confines of his cowl and batcave is nonexistent. Lest this sound like another recap of Batman v. Superman however, the character is played explicitly for laughs, a ludicrous man-child of undeniable skill whose password in the Batcave is "Iron Man Sucks", and whose butler, Alfred (Ralph Fiennes), reminds him periodically of the last few times he entered a brooding phase (the dates of every other Batman movie ever made, as well as the Adam West Batman TV episode where he danced the Batusi). 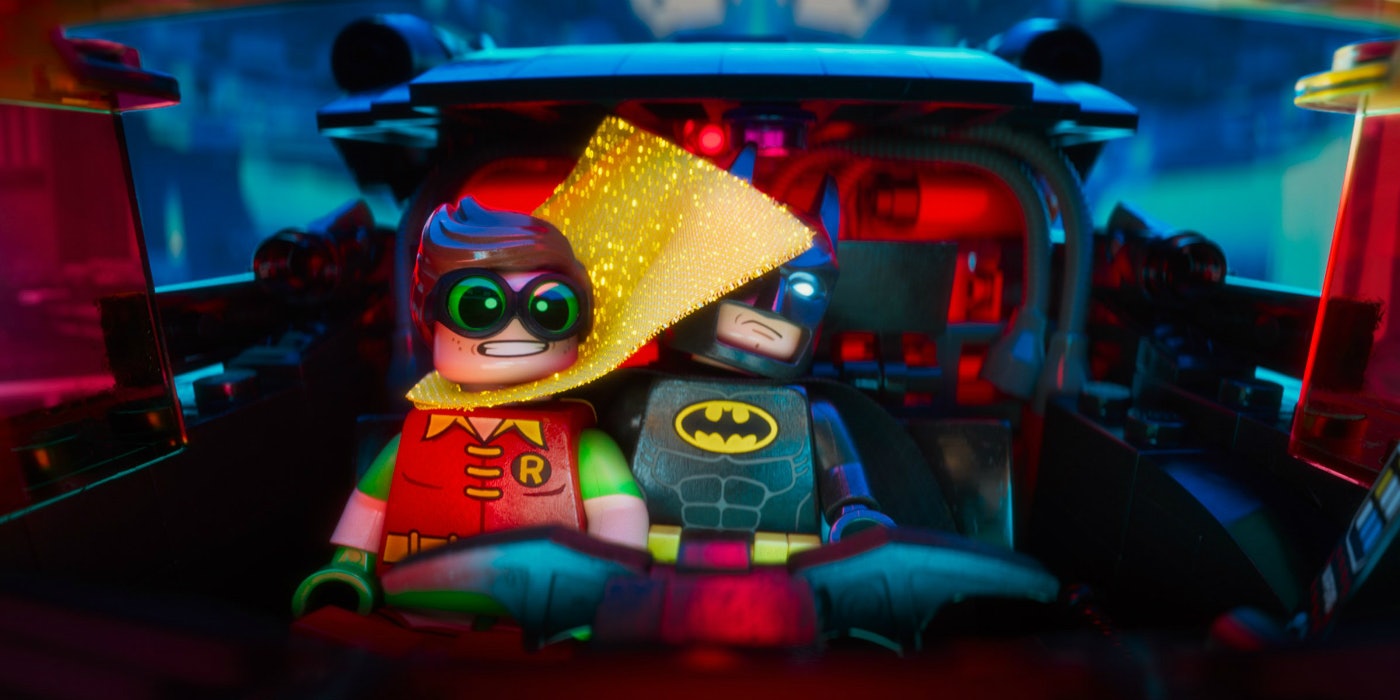 Yeah, in case it wasn't clear, this is a movie that doesn't take itself overly seriously, and given the propensity for comic book films, particularly DC/Batman-related comic book films to do just that in the last decade, the result is a welcome change away from the "SERIOUS BUSINESS!" style that every other Batman property has had, to varying effect, since Joel Schumacher gave it up. Early on in the movie, Batman simultaneously defeats his entire rogue's gallery at once, all while singing (and occasionally performing a guitar solo) about how incredibly awesome he is, because he's Batman. That's not to say that there's no heart to the story, certainly, just that the movie accepts that we all know how badass Batman is, and wishes to tell something else about him, something not seen in proper Batman media outside of fan comics. Along with this comes The Lego Movie's wanton disregard for the boundaries of licensing and canon, as Joker, in his quixotic quest to get Batman to admit that he hates him most of all (this is exactly as ridiculous as you think), eventually comes by the services of such luminaries as Sauron, Agent Smith, Voldemort, Godzilla, The Wicked Witch of the West, and the Daleks, not as cameos, but as actual elements of the plot and story. This tendency by the Lego Movie series (recall that the last movie had Batman beating up Han Solo so as to steal a vital component for his impending rescue of the 2002 Los Angeles Lakers) has always been one of the great uses of a master-license in modern filmmaking, and it's refreshing to see it all over again, even if they inexplicably miss an opportunity to have Fiennes reprise his voice-role for Voldemort. Even when not literally robbing the stables of other great properties, the film uses visual gags and even voicework ones to send-up largely every superhero convention in existence, from the Bane and Mr. Freeze voices clearly pasticheing their most famous portrayers, to the Justice League "forgetting" to invite Batman to their anniversary party at the Fortress of Solitude because he's such a misanthropic douche. What's not to love?

Things Havoc disliked: As with any sequel, the question must arise as to whether The Lego Batman Movie is as good as The Lego Movie was, and no, it is not. The reason for this isn't just because The Lego Movie caught lightning in a bottle and that this film cannot possibly replicate the astounding surprise that was its predecessor, though of course there is that. It also has to do with the fact that The Lego Movie's scale and breadth of imagination was satisfyingly vast, with settings and characters stolen from fantasy films, crime dramas, space operas, sports teams, internet memes, Adult Swim cartoons, and the works of Leonardo da Vinci and Aristophanes, all tied together with an intensely humanizing meta-story about the nature of imagination and wonder. The Lego Batman movie does not contain those things, content instead to tell a fairly conventional Batman story, albeit one that is both well-crafted, and unlikely to be seen outside the bounds of imgur or Fanfiction.net. Beyond the fact that vast numbers of villains from other properties exist and are thrown into the story, there is really no hint of the wider Lego Metaverse that the first movie established, and the whole concept of Master Builders or the assembly of ridiculous contraptions out of the ubiquitous Lego bricks is either absent entirely, or surfaces just for a second here and there throughout the movie. There's nothing wrong with that per se, as the film's predecessor more or less said everything that needed to be said on that subject, but it does leave the film feeling much more restricted than The Lego Movie itself did. That puts it in good company with 99% of movies made, of course, but it also makes the inevitable comparisons all the more obvious. The Lego Batman movie is a very good Batman film. The Lego Movie itself was a masterpiece.

Final thoughts:   But at the same time, I have never, ever allowed myself to fall into the trap of disliking a film simply for not being another film, and a very good Batman movie is quite a thing in and of itself, particularly one that is so radically different from all the previous Batman movies we have experienced. As such, my recommendation is that people leave the previous film entirely out of their calculations when deciding whether or not to see this one, and simply try to see the movie as its own thing, an extremely-funny send-up to the conventions and tropes of the Batman franchise and legacy. It may not be a stone classic the way that the first one was, but it is a fine, well-crafted, and highly-entertaining film. And if that's not good enough for you, then you either see way too many movies, or none at all.