One sentence synopsis:   John Wick confronts a figure from his past and a horde of secret assassins intent on killing him.

Things Havoc liked:  You write reviews for long enough in regards to any kind of subjective thing, and eventually you're going to make mistakes. Obviously I, being an expert, am less prone to such things than others are, but the fact remains that even I can make the occasional slip up, or simply have my viewpoints on movies evolve over time. So it is with 2014's Neo-noir action extravaganza, John Wick, a Keanu Reeves showcase of excellent action, excellent cinematography, and very, very little else. I was complimentary towards John Wick in its original incarnation, but somewhat grudgingly-so, as i felt that the movie's lack of any kind of story beyond the most basic excuse for action sequences was a flaw, and that the movie was consequently one-dimensional. I try to put enough thought into these reviews to avoid having to eat crow later on, but over the course of the years between that review and this one, I must admit that I began to re-think my position on John Wick, as the film's simplicity came to look more and more like leanness, and the other issues I had with it came to feel less important on the periodic, repeat viewings that I engaged in. Moreover, the film's strengths, particularly its fantastic action, became more impressive in hindsight, particularly as I went through movies like The Expendables 3 or Spectre. Though I still didn't think it amazing, I have come to respect John Wick more than I did before, and wish that I had given it a higher score.

Fortunately, I now have an opportunity to make up for past amends. Because the sequel is goddamned awesome.

John Wick: Chapter 2, is a staggeringly good action movie, a purified exercise in cinematic talent, a baroque ode to the fine art of staging and filming violence as performed by masters of the art. It is a polished, expertly-crafted jewel in the dross that is typically February releases, a work of excess-laden, artistic bliss. If you are at all a fan of action movies as a theoretical concept, you will adore its every blood-spattered moment, and need read no further for me to convince you. And even if action movies are lost upon you, this one is so classically-made and lovingly-crafted that you may find yourself enjoying it despite your best efforts. Which category I am in should be obvious. 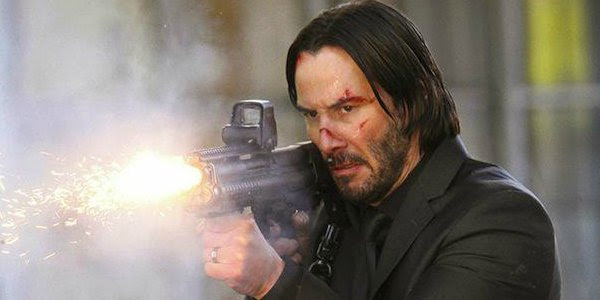 The original John Wick's action was its strongest suit, so good that it influenced other action movies like The Accountant, but this film's action makes the first look like an exercise in Jason-Bournesque shaky-cam. The fighting, and there is so goddamn much of it, is a ballet of death, with crisp, beautifully-framed shots of shooting, of knife-fighting, of close-quarters combat by men who clearly intend to kill one another with ruthless, bloody efficiency. Some of the best scenes in the film come when John Wick fights some other super-assassin over who will get control of a single knife or gun and kill the other with a shot to the head. Bone-shattering blows and falls alternate with artistic gunplay of all types, as dozens of men are cut down in hails of gunfire filmed to make their demises seem neither comical, as in a bad action movie, nor foregone conclusions, as in a middling one. So relentlessly superb is the action in this movie that when special scenes finally arise, such as the on-screen revelation of just how lethal John Wick can be with something as benign as a pencil, it actually feels like a shocking confirmation of how deadly the character is, not some director's contrivance to allow the hero to show off. Director Chad Stahelski, whose only directed films are the John Wick series, has a stuntman background going all the way back to 1994's The Crow (where he served as Brandon Lee's replacement stand-in following the terrible on-set accident that killed him), and it shows in this film, as the entire movie is cored around its action, and exists as a showcase of the art form. 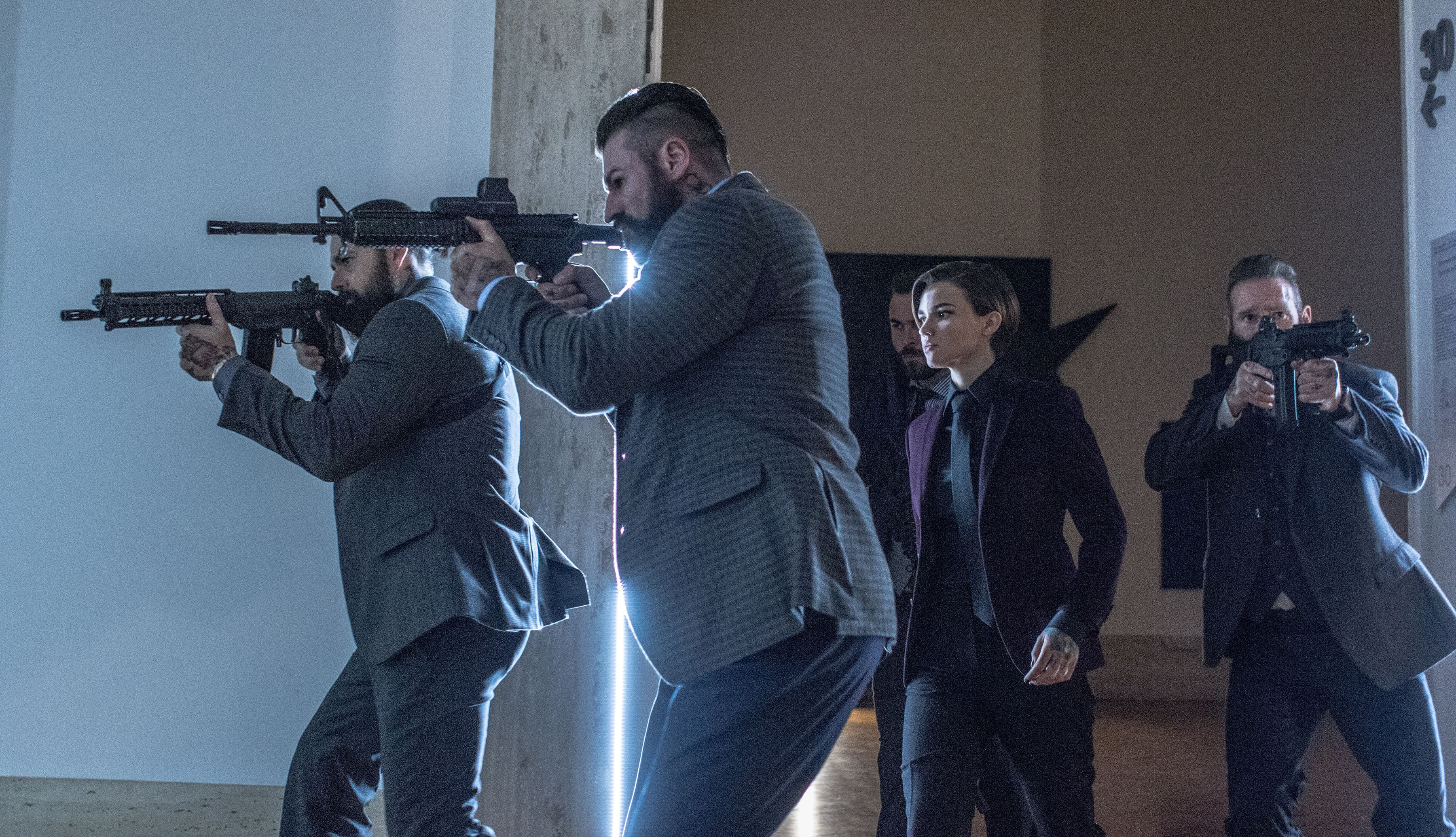 Which is not to say that the cast is letting the side down. Keanu Reeves is a known quantity at this point, an actor whose range is perhaps not the widest, but who is consistently entertaining and effective within that range. This is no slur against (by all accounts) one of the kindest and most thoughtful men in Hollywood, only an attempt to point out that, in the John Wick series, Reeves has found what might be his perfect role. Whatever his acting limitations may be, Reeves is ruthlessly good at playing a preternaturally-skilled killer of men, encompassing both the physical demands of the role (for which he performed his own stunts, of course), and the dead-eyed, monotone expressionless soul-void that must reside at the core of a character that does the things he does. The film is by no means a deconstruction of action heroes or anything, it's simply a role written (literally, I imagine), for Keanu, which he is unsurprisingly great at.

What is surprising, though, is how good the rest of his castmates are, particularly rapper/actor Common, whom I've always sort of casually liked without having any real affection for. No longer. Playing the role of Cassian, another member of the Invisible, International Fraternity of Invincible Super-Assassins, Common is on another goddamn level here, as his attempts to take revenge on Wick lead to a series of action setpieces that are staggering to behold, even by comparison to the rest of the movie. A standout moment involves the two of them walking as casually as they can through a train station attempting to kill one another with silenced handguns without anyone else finding out that they are shooting at each other, and ends with a knife-fight on a train that is, by itself, more exciting and energetic than the entire Taken series put together. The rest of the cast includes recurring characters like Ian MacShane's Winston, and Lance Reddick's Charon, respectively the director and the concierge of "The Continental", a series of hotels and underground service providers who govern and manage the aforementioned Invisible, International Fraternity of Invincible Super-Assassins (hereafter referred to as the IIFISA). The film expands on the fascinating, briefly-glimpsed world of the IIFISA, showing us its locations elsewhere in the world, its services on-offer (including Peter Serafinowicz as a Sommelier who deals in more than just wine), and even hints about its top-level organization. The film stops short of showing us enough to spoil the mystery, but tantalizes us with hints and references and the charming anachronisms of the IIFISA's old-world operational style that feel, at times, like something out of a gothic-punk vampire story of the late 90s. Newcomers (besides Common), include the increasingly ubiquitous Ruby Rose as a mute assassin (the IIFISA has always been quite inclusive) working for yet another impeccably-powerful mafia boss, and none other than Laurence Fishburne playing "The Bowery King", a lord of beggars and thieves throughout New York who takes the opportunity of his scenes with Reeves to make all the Matrix in-jokes imaginable, while feasting gluttonously on the nearby scenery. This is not an objection.

Things Havoc disliked:  The setting of the John Wick films has always been fascinating. The story has not. Particularly here, where absent the (flimsy) motivations of the first film (summarized expertly at the beginning of the movie by the irreplaceable Peter Stormare), Wick seems to be plunged into this movie for no reason at all. Indeed, the plot is so absent that it kind of starts to resemble an idiot plot, in that Wick makes a decision early on in the film that he knows (being a member of the IIFISA himself) will automatically and absolutely lead to violence and outrages being performed against his person, and then acts put out and astonished that it has done so. The rules of this world are fascinating to us as viewers, but are not that complicated (part of their appeal, frankly), and Wick violates them in the first place for no reason other than he can't be bothered to comply. I know I opened the last movie by opining that John Wick was actually the bad guy in the first movie, but here, he seems to be dragged into things more or less by default, which kick-starts the film in a very strange, not particularly compelling way. I know that a movie like that is going for the "all-style, little-substance" route that a lot of action movies (and most of Quentin Tarantino's work) aims for, and by and large it does it very well, but the base fact is that John Wick has always been the least interesting part of the world of the John Wick films. And for a little while, at least, the movie seems to have forgotten that, before things finally start to pick up. 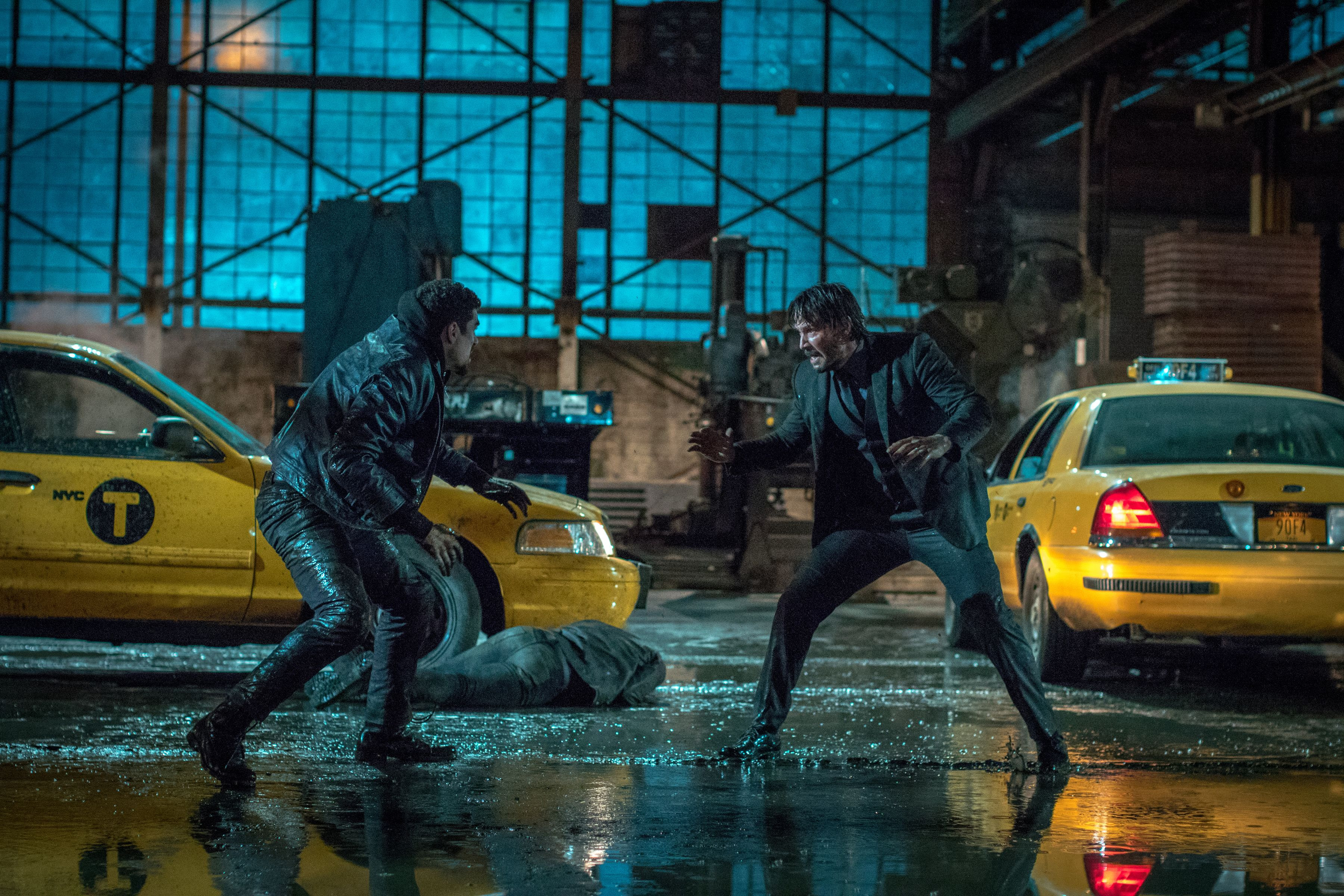 Final thoughts:   As people have never let me forget, I once famously predicted that Action Movies as a genre were dead, and in that sense, John Wick Chapter 2 is merely the latest refutation of my most infamous prediction. Rarely, however, am I this glad to be wrong about something. John Wick, Chapter 2, is a bloody, orgiastic masterpiece, restrained and unhinged all at the same time, with conceits that run right up to the boundary between brilliant and stupid, and tease you before bringing on the next showcase. Like the Raid films of Indonesia, it is a solid, demonstrable step up from what came before it, and leaves one hungry to see more of the stylish, fascinating, and incredibly cool world that it has constructed for itself, all without over-explanation or condescension to the audience. It rules.

Go see this movie. If you like action in even a theoretical sense, you will not regret it. And if you don't, it may just convert you.