One sentence synopsis:   The black boyfriend of a white girl visits her parents' house in upstate New York, only to find that things are stranger than he expected.

Things Havoc liked:  By now, regular readers must be aware that I'm a big fan of the sketch comedy duo Key & Peele, the funniest duo since the end of That Mitchell and Webb Look (I promise that I made none of the preceding sentence up). I've had occasion to mention this a couple of times in the last eighteen months or so, thanks to the fact that both Jordan Peele and Keegan-Michael Key have spent that period making a series of films and film appearances. Between Keanu, written by the former, and Don't Think Twice, starring the latter, I've been seeing quite a bit of what the two have to offer. This time however, Mr. Peele has broken off on his own, writing and directing a comedy-horror film filled, at least ostensibly, with the same biting racial satire that the show involved. Worse ideas than this have been made into good movies.

Regular readers will also know by now that horror is not my genre, by and large. Part of that is just personal preference, but part of it is also that most horror movies are just boring, trope-laden exercises in jump scares and contrivances, lacking all artistry or subtlety. I appreciate that the same could be said for 90% of most genres, and further that it's a bit churlish of me to dismiss a genre of film that I admittedly don't partake of terribly often, but when you see as many movies as I do, hard choices must be made. That said, I've always had a bit of admiration for movies that combine horror with other genres, particularly comedy, as in the case of the original Evil Dead II, Army of Darkness, or 2012's standout The Cabin in the Woods. Get Out is another addition to that genre, this time bringing not slapstick or deconstruction to the horror genre, but modern satire replete with clever touches that start with a reversal of the typical urban horror movie opening scene, as a black man tries to convince himself that everything is going to be fine as he walks through an affluent suburban neighborhood, only for things to go just as horribly as he fears they will. It's a scene combining ironic humor with bitter reflections on race and society, and strikes just the right tone for the rest of the movie to follow. Scenes where our protagonist, Chris Washington (Daniel Kaluuya), a burgeoning photographer, is visiting the wealthy parents of his white girlfriend, involve endless moments of perfectly ripe awkwardness, as legions of rich, old white people, who likely have never spoken to a black person in their lives who didn't work for them, struggle to find something to say to this person who might as well be from Mars for all they know, and grasp at the same tired, unprompted declarations concerning their appreciation of black athletes, their admiration of hip hop culture (something they plainly know nothing about), and their constant and loudly affirmed support for Barack Obama, even when politics is not being discussed. There's a weary familiarity to this whole concept, to being an outsider who is not allowed to forget that he is an outsider by the simple fact of people refusing to see him as anything else, that rings absolutely true, and while I would never claim I have the first idea of what it is to be Black in America (or anywhere else), I have been in such situations before, standing in a theoretically convivial setting as people sputter and stammer and desperately try to regurgitate something socially acceptable to say when they are confronted, for the first time in years no doubt, with a member of a group they are not a part of. In my case it involves a lot of unprompted lectures about Israel. In Chris' case, it leads to actual mad science. 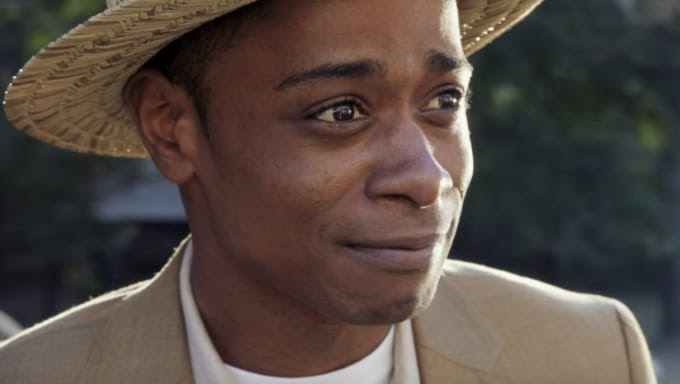 Indeed, lest I make Get Out sound like an after-school special about how to treat people like people, the movie is, at its core, a horror film, and things begin to get very weird very quickly in this quaint hamlet in the New York woods. Fortunately, unlike roughly every other horror movie made in the last thirty years, this one anchors itself around suspense and unease more than gimmicks and blood. Lest I sound too critical of horror directors, the reason the majority of them eschew subtlety, is that absent gore and jump scares, they would be forced to rely upon such unpredictable things as "acting", which this film has the temerity to place front and center. Both Kaluuya and Alison Williams (playing his girlfriend, Rose) are perfectly fine as the leads, but the stars of the show are the supporting characters, particularly Bradley Whitford (who also stole the show in Cabin in the Woods), playing Rose's neurosurgeon father who is up to far more than he appears to be. Betty Gabriel and Marcus Henderson play the family's black servants, who are convincingly and comprehensively creepy as hell. Standup comedian Lil Rel Howery, meanwhile, plays Chris' friend Rod, a TSA agent who investigates the nefarious goings on and provides some welcome comic relief. For a film built entirely on mood and disquiet, the actors all do a spectacular job, providing the creepy, right-angled atmosphere that any proper horror movie, even horror-comedies, require.

Things Havoc disliked:  I won't pretend that the resulting film is perfect, of course. The ultimate explanation for why everything is happening as it is happening is, of course, demonstrably goofy, which is fine, but also doesn't really fit the satirical and socio-political themes that the movie has been stirring up, which is not. Even within the context of a horror-comedy like this, there are a lot of questions left unanswered as to why characters are acting the way they do, and why certain terrible things are happening to particular characters. To say more would be a fairly serious spoiler, but I'll just point out that had the movie not raised these questions in the first place, I would probably have given it a pass for not answering them.

There's also, of course, the end of the film, which is a violent, ridiculous act of lunacy (this is not an objection), but which does require an awful lot of characters to spontaneously start acting an awful lot different than they have been established as acting, in a way that exceeded, at least for me, the bounds of suspension of disbelief and began to enter the bounds of script contrivance. Again, normally this wouldn't be such a big deal, save that the movie plays around with questions such as the pre-established assumptions about people based on race in modern society, and then seems to miss the fact that it is asking us all to accept that a black man, confronted with a weird and dangerous situation, will immediately transform into the Punisher, capable, without any hesitation, of killing half a dozen people in cold blood that he has just met. To be clear, I'm not calling the film racist, or anything so stupid as that, lots of horror movies assume the exact same thing of their protagonists when the ending approaches and we need to winnow the cast in an efficient manner. I'm just saying that there were opportunities for yet sharper satire left on the table untouched, and that consequently a lot of what is there seems a bit... shall we say 'obvious'? At least to my Bay Area-trained social senses?

Final thoughts:   Still, with or without such decisions, Get Out is a fine movie, perceptive without being monomaniacal, timely without being datable, funny without losing its focus on the fundamental horror of the situation, and satirical without being absurdly strident. All of these virtues, have, of course, not stopped most of the mainstream critics who have reviewed this movie from falling all over themselves in efforts to out-do one another's stupidity, with some claiming that it "finally indicts the dark terrors at the heart of limousine liberalism" (apparently the reviewer in question believes that rich white people who vote democrat are doing so because they secretly wish to use mad science to enslave black people?), and others indicating that it "plays like anti-miscegenation propaganda from the 50s" (which is kind of like claiming that Alien was designed to advocate repealing the 20th amendment). I could reflect here that, as usual, the instant you try and talk cogently about race in America, everyone involved becomes an idiot, but none of that is the film's fault. Get Out, whatever purposes people choose to put it to, is a strong, funny, tense, and well-crafted film. I heartily look forward to what Jordan Peele has to offer us in the future. And I'd be lying if I denied that I also look forward to seeing how dumb those offerings make the rest of my fellow critics sound.

Next Time:  Stories which are as ancient as chronology itself.
at April 29, 2017