One sentence synopsis:   Near the end of the Vietnam war, A joint army-research expedition heads to a mysterious island to discover its terrible secrets.

Things Havoc liked:  I've never been a big fan of the King Kong movies, mostly because the majority of them suck. Leaving aside the original 1933 classic, which is hard to evaluate properly in a modern setting, all of the other King Kong movies (and there have between 7 and 13, depending on which ones count) have been godawful rubber-suit-monster affairs, over-effected "extravaganzas", or big-budget wastes of time, particularly 2005's Peter Jackson version, in which the Lord of the Lord of the Rings managed to give in to all of his worst habits while wasting a stellar cast. As such, I was not exactly chomping at the bit to go see this one, cast or no cast, but in the Doldrums season, one must often take what one can get, and so to the theater I went, to watch Samuel L. Jackson endeavor to get these motherfucking apes, off this motherfucking island. 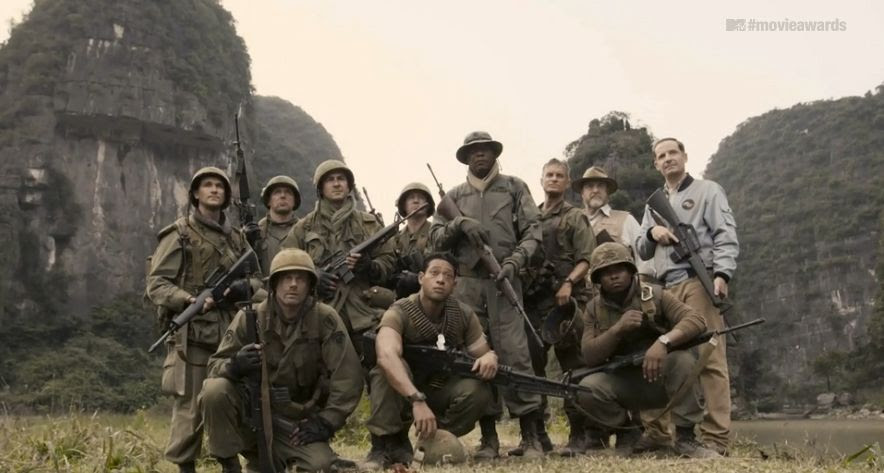 Yes, Kong: Skull Island stars Samuel L. Jackson, he of the shouting and the myriad biblical quotes, as Colonel Packard, a hardcore military man of the sort that Jackson has played many times before, and God-willing, will play many times again. Bitter over the US' impending withdrawal in Vietnam, he leads an expedition in the best Doc-Savage-meets-Apocalypse-Now tradition to Skull Island, a hidden island that has peaked the interest of government agencies, corporations, and researchers for a variety of purposes, altruistic and nefarious. Jackson is amazing, because of course he is, a hard-bitten military officer who takes the Captain Ahab role after things begin to go FUBAR and King Kong beats the ever-loving crap out of his hyper-macho air cavalry force. I shouldn't have to tell any of you now that Samuel L. Jackson knows how to play a role like this, and his turn reminds me, in kind of a weird way, of The Rock's performance in the 2005 movie adaptation of Doom, a terrible movie whose one redeeming quality was the snarling, over-the-top macho military commander trying to seize control of the situation back from the demons in whose hands it lay. Or maybe he's doing a sendup to Robert Duvall's Colonel Killgore. Who knows?

The rest of the cast does not let the side down. John Goodman, America's slightly sleazy-but-fun uncle, plays Bill Randa, head of "Monarch", a government organization designed to investigate... well anything monsterous and dangerous it appears, who has stapled his own research team to the military expedition, and gets to look forlorn and world-weary as everything goes to hell around him. Corey Hawkins (Dr. Dre in Straight Outta Compton) and Chinese actress Jing Tian, get the 'young, idealistic scientist' roles, and do a fine job with them, horrified civilians entirely unready for the pulp-movie insanity that is exploding all around them. But the biggest surprise within the cast is none other than John C. Reilly, who plays a WWII fighter pilot shot down (along with his quarry) on Skull Island some thirty years before. Though Reilly is known for buffoonish roles, he's an excellent actor, and here he gets to actually play the wise voice of reason for once, filling the characters (and the audience) in on what is actually going on in this mysterious island. Reilly wrings considerable depth and even heartfelt sentiment from his character, a man who has been looking to go home for thirty-something years, not precisely what I was expecting to encounter in a movie about giant apes and dinosaurs.

Oh, did I mention there were giant apes and dinosaurs? And giant tree-spiders that can impale a man with one stomp? Because there are those things, and there are also Huey attack helicopters, machine guns, grenade launchers and flame-throwers with which these things are repeatedly fought, and if that's not the sort of thing that interests you, then you should mentally chalk this movie up right now as "not for you" and walk away from it. For all the rest of us who appreciate the chance to see giant monsters beating the holy hell out of one another, this movie has plenty to offer. Unlike 2014's utterly useless Godzilla, this movie is full of Kong, from a thunderous opening sequence that calls back to the best of Oliver Stone and Francis Ford Copolla's work, only with a hundred-foot ape dropped into the middle of everything, to the obligatory monster-on-monster fights, shot in vibrant technicolor, in full daylight, with every bone-shattering impact there to see on the screen. I cannot believe that in 2017 I still have to express surprise whenever a filmmaker does something as revolutionary as show us what the movie is about, but one takes what one can get after a point. And when Kong isn't on screen, we have other monsters to tide us over, enormous dinosauroid-things called Skullcrawlers, arachnids so large that they can pass for bamboo stalks, and a host of other creatures with voracious appetites and an overabundance of teeth. Our heroes are devoured, stabbed, smashed, and crushed in their dozens (of course), but the film never gets to the creature-feature levels that the Jackson version did, remaining in the realm of campy action fun, the way these movies are supposed to.

Things Havoc disliked: I could nitpick, of course. I could talk about how the weapons that the air-cavalry brings with them seem about as effective as potato guns, despite the fact that they are shooting at living, breathing creatures, and that the weapons in question were designed to punch holes in face-hardened steel plate. I could talk about the fact that people seem awfully willing to take the aforementioned useless weapons up against the monsters time and time again, despite the fact that the previous occasions have generally involved people firing the same useless guns at the same ravenous monsters before being turned into the same bloody smears. But this sort of thing is a convention of the monster movie, and it would be a bit churlish to get up in arms over it.

What is not churlish to object to are our actual two leads, Tom Hiddleston, playing an SAS/Lone Competent soldier named James Conrad (BEHOLD THE WONDEROUS SUBTLETY OF THE SYMBOLISM IN THIS FILM!!!), and Brie Larson, playing a peacenik photojournalist who is here to serve as our token "maybe we should not barge onto the island and butcher everything in sight" moral compass. I unabashedly love Tom Hiddleston in the Thor films of course, but I have to admit that, outside the MCU, he has not made a particularly good case for himself, appearing either in middling films like Only Lovers Left Alive and Crimson Peak, and utter dreck like High Rise. Hiddleston here plays a Great White Hunter archetype that really exists only to contrast with the macho military men who obediently waltz off to be slaughtered, and has little to no character beyond the fact that he does not believe in beating his head uselessly against sixty-foot eating machines. As to Larson... well I just can't quite figure out if Brie Larson is any good as an actress or not, as she keeps popping up in movies I don't care about, or playing roles that demand nothing of her. This is par for the course, as she's more or less here just to be a purely platonic love interest for Hiddleston, without even the token interest of having the giant gorilla fall in love with her, as is typical with the other movies in this series. Neither of these two are bad per se, it's just that there's nothing at all interesting about either of them, which makes all the time we spend with them as opposed to Samuel L. Jackson or the office-building-sized monstrosities that inhabit the island, something of a waste.

Final thoughts:   I expected nothing of Kong: Skull Island, as I have expected nothing of basically any giant monster movie for the last twenty years, but lo and behold, this one surprised me. It's not a masterpiece of the genre or anything (and I am not qualified to pronounce it one even if it was), but it's a fun, enjoyable movie, sufficiently campy and pulpy for the central conceit to work, and full of lush, vibrant action, several legitimately hillarious sight gags (the heroic last stand of a character played by veteran character actor Shea Whigham is amazing), and excellent Vietnam-style cinematography by newcomer director Jordan Vogt-Roberts (as well as his co-director, his epic beard of power). Supposedly, this film, like every other film in existence nowadays, is supposed to be the start of a wider franchise of giant monster movies, one which includes Godzilla and several more films to come. I'm rather ambivalent on that subject at the moment, but leaving the future aside for the moment, Skull Island is a worthy film and a good use of time if, like me, you think Oliver Stone could stand to throw a few more giant monsters into his movies.

If nothing else, it would make his next movie (a hagiographic puff piece about how Vladimir Putin is the best person ever) considerably more interesting.