One sentence synopsis:  A devastating attack by a mysterious assailant forces the Kingsmen to enlist the aid of their American cousins, the Statesmen. 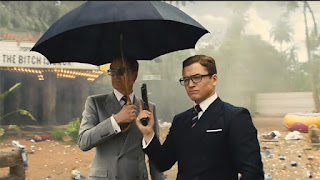 Things Havoc liked: 2015 was one of the best years in this project's history, and of all the films that graced it, the one that was the largest surprise to me was unquestionably Matthew Vaughn's Kingsman: The Secret Service, a movie in which Vaughn continued his career policy of only making movies adapted from the comics of legendary indie comic author (and gargantuan asshole) Mark Millar. This is a very strange policy for a director who previously made excellent films like Stardust and X-Men: First Class, but the results have been uniformly great, so who am I to complain. Kingsman was a smash hit by every metric, so it's not surprising that a sequel should have been commissioned, and given how flat Kick-Ass 2 fell without Vaughn's direction (even though I liked it), it's not a surprise that Vaughn should be tapped to actually direct the followup this time. And thus here we are.

Eggsy (Taron Edgerton) has certainly come up in the world. Not only did he save the world during the events of Kingsman 1, joining an elite organization of super-spies dedicated to world peace and making off with riches and panache in the offing, he has since become one of the foremost agents of the Kingsmen, pursued his relationship with the Crown Princess of Sweden, and is otherwise enjoying his life as the world's foremost throwback to James Bond (and who could blame him). Obviously it's no spoiler to state that his idyllic existence is about to be upended, but Edgerton remains an excellent actor who can handle both the camp and the serious aspects of the film with aplomb, and his mugging for the camera is helpfully supplemented by the addition of a half-dozen other actors who are just as good at doing so. Mark Strong returns as Merlin, the Q-analogue of the Kingsman world, who is brutally and violently promoted into active status with a sudden, devastating assault on the Kingsmen from assailants unknown. Any casual reader of my reviews knows that it is my concerted opinion that Mark Strong is the man, and the man he remains here, with a running joke of his character's appreciation for John Denver of all things being used particularly well. Colin Firth returns as Galahad, a surprise the trailers themselves could not wait to spoil, and which I shall as well. It's unquestionable that his character's presence in this movie is a massive plot shoehorn designed to let him play again, but at the same time, his performance in the first one was one of the best thing Firth has ever done, and I'd be very churlish to object to more. Firth retains his refined Mr-Darcy-as-James-Bond charm from the first movie, and it's just awesome. If, like me, you simply loved the first movie and wanted more of it, Golden Circle offers just the dish. 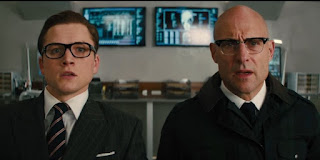 Which is not to say that there aren't new elements here, nor that those elements are uninteresting. For one thing, Julianne Moore (I got her name right this time!) plays a villain drawn directly from the same stable as Samuel L. Jackson's Mike Tyson/Steve Jobs crossover from last time. Her character is Poppy Adams, a fifties-obsessed Pleasantville escapee who has reconstructed an amalgamated theme park version of the 1950s in the Cambodian jungle, and uses it as the headquarters of her worldwide drug empire. If this sounds absurd, that is because it is, and the movie wastes no time in having her find a number of dogs to kick to establish her off-brand evil, even as she prepares a diabolical plot to poison the very drugs she is pumping out abroad to force the world to legalize her product. Moore and I have not had the best of relationships in movies before (I was so mad at the last Hunger Games movie that I accidentally started ranting about a completely different actress), but this is her sweet spot, where she can play a totally deranged killer with a dose of syrupy sweetness, perfectly fitting with a movie like this. And the fact that a major element of her evil plan involves kidnapped Elton John (playing himself), and forcing him to play his greatest hits at gunpoint certainly does not detract.

But the biggest addition is the Statesmen, the American cousins of the Kingsmen, and this, right here, is the movie's strongest element, because the Statesmen are insane and ludicrous in all the right ways, a campy send-up to the most American stereotypes imaginable. Front and center are agents Tequila and Whiskey, respectively Channing Tatum and Pedro Pascal. Tatum is a veteran of super-campy movies, of course, and as a fine character actor, does better, I find, the more ludicrous the role (see Hail, Caesar! for evidence of this). But oddly, given the billing, Tatum's role is far less important than Pascal's, whom I've been a huge fan of since Game of Thrones' fourth season, and who in this movie is awesome, a drawling cowboy who does battle with six shooters, a retractable bullwhip, and an electric lariat that can saw people in half. Pascal is awesome, he's been awesome in everything I've ever seen him in, and so having him play the lion's share of the Statesmen roles in this round is no slight whatsoever. Rounding out the Statesmen are Halle Berry and Jeff Bridges, the former playing Mark Strong, and the latter playing himself. Just think about it, and you will realize that this is perfect.

But there's more to like here than the characters. The whole aesthetic of the movie is genius, as it was in the last film, but moreso here. The Kingsmen are, after all, a hyper-stylized version of both what 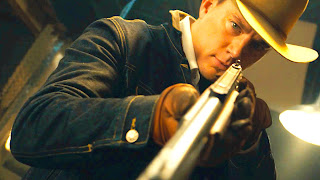 the world sees of Britain, and what Britain sees itself as. As such they are invincible super-spies in impossibly well-manicured bespoke suits, their entire look and feel being that of Saville Row and Buckingham Palace. Only such a mentality could have resulted in a film in which the protagonists' main weapons are cuff links and umbrellas. The Statesmen, existing in the same universe, are the equivalent hyper-stylization of what Americans see of themselves, and what everyone else sees of them, and thus they are cowboys and gunslingers, their entire aesthetic being firearms and mahogany, not Saville Row but a hunting lodge. The Statesmen are headquartered in a Kentucky whiskey distillery, their weapons of choice the tools of cowboys, their affect a southern drawl, even when the actors themselves can barely manage it. Every element of this is perfect, over-the-top, sensationalized, steriotypical, awesome, and deeply appropriate. Keeping its eye forever on the salient themes of the series, the movie never allows itself to forget that this is a universe in which it is a completely normal part of human existence to have Colin Firth and Elton John battling killer dog robots with bowling balls.

Things Havoc disliked: The plot is a mess, of course, but that was also true of the first one. It may or may not be a bit more of a mess here though, with plot cul-de-sacs galore, such as the question, awkwardly brought up and resolved, of whether Halle Berry's Agent Ginger Ale can be promoted to a field agent, or Pedro Pascal's Agent Whiskey's motivations for his actions throughout the movie. Various characters, some from the first film, some brought in specially for this one, have very little to do, either being killed off rather unceremoniously, or in one case getting literally stuffed in a refrigerator to wait for the film to end. None of these things are truly crushing blows to the film's overall quality, don't get me wrong, but they do speak to a somewhat larger problem at work here.

Kingsman 1 was, in many ways, a very complete story, not leaving us with much leverage in terms of sequels, and Kingsman 2 really never manages to get over that particular hurdle. A lot of elements in the film, from Colin Firth's presence in it at all, to the extended action sequence that starts it off, do not seem to exist because they're integral to the story (as opposed to the plot), but because they are the sort of thing (in some cases the literal thing) that was in the first movie and that people responded positively to, and so by God we have to have it in the next film as well. Fanservice of this sort can work, certainly, but it's not generally the place that great storytelling emerges from, and there just isn't much great storytelling, or even really... any storytelling going on in this movie. Plenty of stuff happens, don't get me wrong. Things explode, people get the crap beaten out of them in hyper-cinematic fashion (a fight sequence in the end shot in a dizzying long-take is pretty damned epic), people die, some of them with significant send-offs, and we even get some mechanistic plot advancement for some of the characters, but the entire enterprise is spectacle. Spectacle is good, don't get me wrong, and in fact Vaughn knows how to produce it better than most, but it isn't a proper substitute for a full fledged story arc, and the entire film, no matter how well made it is mechanically, does unavoidably feel like a contractually-obligated sequel at a number of points. 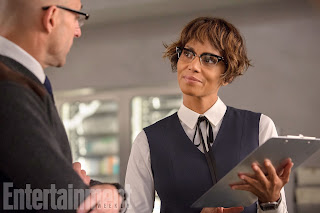 Final thoughts:   I adored Kingsman: The Secret Service, if only because of the tremendous surprise that it was, coming at a bad time on top of a bad marketing campaign and looking like nothing more than a generic action film made to fill space on a calendar. If only by virtue of heightened expectations, Kingsman: The Golden Circle simply can't match the astounding impact of the first film, being neither as astonishing, nor (to be frank) cored around as signature a sequence as the infamous Mr. Darcy vs. The Westboro Baptist Church scene from the original (a sequence that was so jaw-dropping that my first comment thereafter was "I can't believe that someone committed this to film"). It does, unavoidably, carry a hint of empty spectacle within its shooting and exploding. But lest I sound too negative, it is masterful empty spectacle, a ridiculous, campy, ultra-violent, very fun little movie that I did enjoy pretty much start to finish. Is it a great movie? No, ultimately it is not. But it is a good movie, perhaps a very good one. And one should never let oneself get so spoiled, even in an excellent year, that you start objecting to that.