One sentence synopsis:  An aging Queen Victoria befriends a young Indian servant, who becomes her teacher while earning the enmity of the rest of her court. 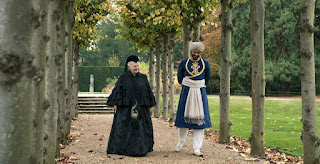 Things Havoc liked: In 1997, British director Stephen Frears made a film called Mrs. Brown, starring Dame Judy Dench and Billy Connolly as, respectively, Queen Victoria, and John Brown, her confidant, friend, and rumored lover in the years following Prince Albert's death. Mrs. Brown was a fine little movie, as are most films that ask Judy Dench to play imperious royalty (her role in Shakespeare in Love was good enough to earn an Oscar nod, despite receiving all of nine seconds of screentime), so much so that twenty years later, we find ourselves with an unofficial sequel of sorts, once more focusing on Victoria's relationship with the next in what appears to have been a long list of friends and confidantes that she amassed throughout her reign. It's good to be the queen.

In 1887, as Victoria was preparing to celebrate her Golden Jubilee, every component nation of the British Empire showered her with gifts from all corners of the world, and sent pages and representatives without number to present said rarities. Among these was Abdul Karim, a Muslim prison clerk from Agra (site of the Taj Mahal), who found himself roped into being sent halfway around the world to present a commemorative coin to the Empress of India, and who of course would come to do much more for the sovereign than that. In the film, Karim is played by Indian actor and model Ali Fazal as a wide-eyed young traveler who isn't quite sure what he's doing in the far off land that he is presently inhabiting, but who is happy to simply make the most of whatever happens, neither intimidated by royalty or the trappings of Empire nor shy about babbling semi-coherently about his homeland and the things about it that fill him with joy. This would probably be insufferable, but the film wisely supplies Karim with a fellow traveler in the form of the world-weary and cynical Mohammed, played by The Big Sick's Adeel Akhtar, whose role it is to suffer from the English climate, food, and imperialism, and to despise all three in equal measure. All comedy is based on pain. 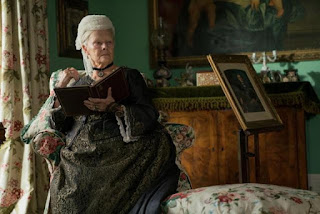 But let's be honest with ourselves here, this movie exists and always existed from inception to showtime, as a showcase for Judy Dench at her Judy Denchiest. Reprising her role as Queen Victoria, Dench is covering old ground in this film, but she's so damn good at playing the tempestuous, impatient, power-addicted queen, that she basically knocks everyone else off the screen. Short-tempered, imperious, and capable of cutting men dead with a single disgruntled stare, this is and has always been Judy Dench's best sort of role, be it as a literal queen or empress, or some sort of substitute figure of unmatched authority (there's a reason she lasted longer in the Bond movies than Pierce Brosnan). Over half the movie is spent with Judy Dench cutting dead a slew of officials, servants, and officious busybodies who are, to a man, scandalized by the fact that she has dared befriend an Indian (the repeated mistaking of Karim for a "Hindu" by officious twits who know nothing is both hilarious and on-point for Victorian Britain). As an excuse to give Judy Dench scenes in which she destroys people with her cut-glass speeches, it's a fairly transparent device, but it's a good deal of fun for that, particularly when the said official is her son, the future King Edward VII (or as he's known in this film, "Bertie"), played by none other than Eddie Izzard, almost unrecognizable under mutton chops and morning dress. 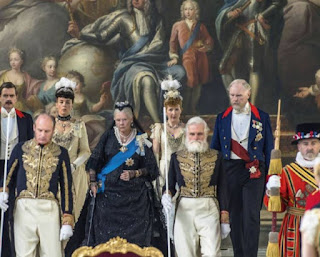 Things Havoc disliked: The problem with a film that's so transparently about giving an actress known for being good at a specific thing a chance to do that thing, is that the film cannot, almost axiomatically, be about much else, particularly with a run-time of less than two hours. As such, the film rather breezes over a lot of material that would probably have been useful to have more of, such as a better sense of what Karim's life in India was like, and a more detailed process of just how it was that he was able to get Victoria's ear in the first place. As it stands, Karim takes the first opportunity he can to start running off in fifty directions about whatever seems interesting to him today, while VIctoria patiently indulges him, something she seems rather uninterested in doing when it comes to anyone else. I understand what the filmmakers are going for, that Karim's wide-eyed innocence is a breath of fresh air when it comes to the stifling atmosphere at court, I just wish it was better established is all, rather than forcing me to rely on the fact that I've seen this movie made fifty times before. There are occasional scenes, such as one between Victoria and Abdul alone on an island in the Scottish Hills, wherein Dench is allowed to give her character more emotional range than "Head Bitch in Charge", but they are few and far between.

There is, of course, also the question of historicity, which is a subject you are all sick of hearing about, and that is just too bad. I normally have little patience for reviewers who excoriate a film because its political content doesn't match with their opinions in every way, but in fairness, there is something to the claims that the film is mired in historical revisionism. The movie goes to extreme lengths to paint Victoria as a liberal, forward-thinking pan-humanitarian, which is, to put things mildly, an... 'interesting' take on the life and opinions of one of the most rabid imperialists in British history, a woman who once threatened to resign her office and retire in disgrace to Germany because the British government was being dilatory in their conquest of the Sudan. The movie professes, among other things, that Victoria was unaware of the provenance of the Koh-i-Noor diamond (captured during the second Anglo-Sikh war of 1849), and so detached from the events of the Indian 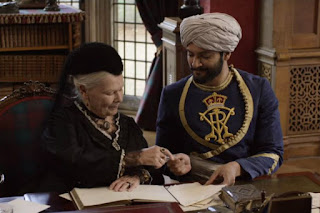 Mutiny that she was unaware of what role the Muslim people of India played in it, neither of which seems likely given Victoria's obsession with her Empire. I am not a stickler for absolute historical truths in every film, despite my reputation, and I both understand and support the concept of being able to tell a simple royalist fantasy once in a while (to say nothing of one who's primary message is one of tolerance for and by Islam), but there is some part of me that sits poorly with a film that not only does all this, but then contrasts it with the thuggish, racist, and reactionary behavior of Edward VII, who in reality was one of the most forward-thinking (and wildly popular) monarchs of his or any age, a man who once publicly upbraided the German Kaiser for his (widely held) opinions that Europeans were of superior bloodstock to the subject races of the colonial Empires. 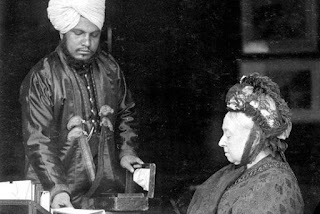 Final thoughts:   Lest I start sounding like the very reviewers I have no use for, no, Victoria and Abdul is not some gross insult heaped upon the altar of history. It is a semi-fantastical story about an old queen and a young clerk and the friendship that develops between them, one that is, in all but tone, fully grounded in historical fact. Abdul Karim existed, did become close friends with Victoria, did teach her to speak and write Urdu (which she was fond of lapsing into during conversations with impenetrable bores), as well as give her lessons on Islam, the Koran, and Indian history. Efforts were made to erase his contributions in the years following Victoria's death, by a government none too interested in having him remembered, efforts which were, until only a few years ago, entirely successful. The impetus to want to record such an event in film, not to mention take the opportunity to allow for Judy Dench to do her thing, is one I understand well. So when all is said and done, register my objections as mere... uneasiness with some of the elements of the film, and not a rejection thereof.

Victoria and Abdul is not the best film of the year, nor the best film to cover such well-worn territory. In some ways it is profoundly flawed. But's a fun little fantasist view of the last days of a legendary queen's life, and of the young man who made them richer, and it needs no further justification for existing than that.