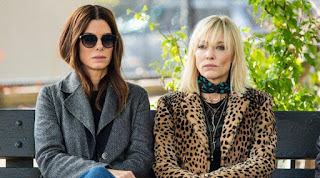 Things Havoc liked: I really liked Ocean's Eleven (the Clooney version). I did not like its sequels. In this, I expect that I resemble largely every moviegoer in America. The original (yes, I know it's a remake, shut up), was a cool, confident heist film, one that held together well, had interesting character actors playing interesting character roles, and was overall a template for how modern heist movies should be made. Soderbergh has gone on to bigger and better things since the Ocean's series seemingly ended, but here comes Gary Ross, of Pleasantville and the surprisingly good Free State of Jones, to give us an all-female version of the formula.

All-female versions of movies, well... let's be honest with ourselves here, they generally suck. They suck because the selling point of the movie is simply that the cast is female, with no thought given to making the movie stand out from their source material in any way beyond this, meaning that the film is almost definitionally derivative, often resulting in abject crap like the Ghostbusters remake of 2016. But to do this as a heist film makes a lot more sense. Heist films are inherently derivative, in that the plot is effectively "steal some shit", and the film is the course of the characters going about stealing it. Doing an all-female version of that makes far more sense than remaking a specific film, especially if the cast is good. 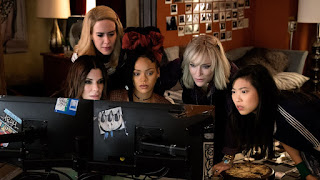 And oh yes, this cast is good. Cate Blanchett, an actress I love, plays Lou, partner in crime to Debbie Ocean, our protagonist, and basically takes on the Brad Pitt role from the original film, wisecracking and being generally cool. Mindy Kaling, whom I love dearly, and Helena Bonham Carter, whom I love dearly on the rare occasions when she's not working with Tim Burton, both liven the cast tremendously, the former as a jeweler desperate to get away from her domineering parents, the latter as an Irish fashion designer desperate to get away from the piles of IRS debt she has incurred through disastrous decisions (an early sequence wherein one of her fashion shows flops magnificently is a highlight). But the best element of the cast is Anne Hathaway, playing the air-headed celebrity target of the heist itself, who gets all the best material playing the sort of person who can lose someone else's $150,000,000 necklace and get angry at them for being upset.

Heist films live or die by their plot coherence, and Ocean's 8 manages to avoid the pitfalls that ruined movies like Logan Lucky by having one that works. The key here is plausibility. The steps that the girls take to steal the jewels they are after make sense within the context of the film, even if a sharp-eyed smark can find ways in which things would fall apart in the real world. We can follow the action from start to finish, and the obligatory twists as the plan almost falls apart and is rescued at the last second are believable, if extreme. This is not as minor a factor as it sounds, as it takes real skill to put together a plot that convincingly sounds like an impossibly difficult plan pulled off by a team of skilled con artists and thieves, and not like a load of writer contrivance designed to get the audience forcefully to the next scene. 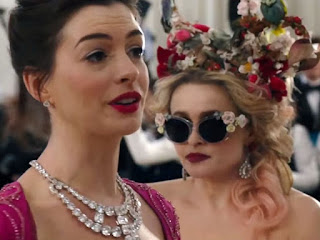 Things Havoc disliked: You may have noticed, if you are familiar with this movie, that when I praised the cast, I neglected to mention the actual lead, Sandra Bullock, an actress I also dearly love, and who is just not good at all in this one. I don't know what went wrong, if she made a bad set of decisions in terms of her acting or if the director gave her bad instructions, but she's terrible in this film, attempting to replicate the George Clooney chill by simply bleeding all emotion out of her character entirely. Everyone else in the movie manages to evidence cool without evidencing such a boring affect, so why Bullock can't is utterly beyond me. 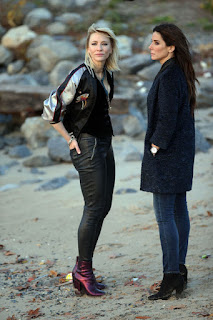 But the main problem with Ocean's 8 is that it's just... alright. It has an all right plot with an alright heist attached to it, planned and executed by alright characters to meet its alright ending with some alright jokes along the way. It managed to entertain for its run time, but only just, and leave a positive impression, but only slightly. It's in every way a 'passable' film, not excelling, not failing, just pretty decent across the board. Whether this is because there was no real intention to make it more than "alright", given that most movies of its type are not even that, or because whatever thrills and excitement the filmmakers intended to add to it simply didn't make it through, I have no idea. The result is the same. Ocean's 8 is an alright film. It is not much more.


Final thoughts:   I really hate writing reviews like this one, as movies that engender a passionate response, be it positive or negative, are much easier to review. Still, I can't get mad at Ocean's 8, as it is a perfectly serviceable, pretty decent movie, one I will not be recalling with scorn once the end of the year worst list comes around (probably). Go see it if you are enthusiastic about the cast or concept, and skip it if not. It makes very little difference either way.