One sentence synopsis:  Various characters turn up at a secret hospital for criminals during a massive riot in near-future Los Angeles. 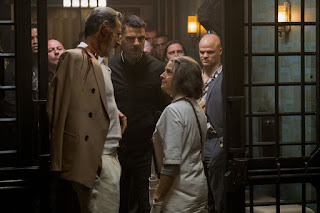 Things Havoc liked: I don't see enough of Jodie Foster. She's one of Hollywood's gems, always interesting to watch, choosing interesting roles, and I only encounter her about once every five years or so, and the last time was Elysium, so to hell with that. I went to see this movie entirely because she was in it (and because of who else was), and so before we go anywhere else, I want recognition from you all that this was a good decision.

Hotel Artemis stars Jodie Foster as a nurse, known almost exclusively as "The Nurse", an agoraphobic who runs a seedy hotel named the Artemis that moonlights as a hospital for paying members of a criminal club that strongly resembles the one in the John Wick movies, albeit the low-rent version. Foster's brilliant in this one, shuffling through the halls of her semi-decrepit old hotel like an old woman, trying to keep the plates spinning as one semi-crazed criminal after another requires her services on the night of a gigantic riot sweeping through downtown Los Angeles. Wrapped up in an inexplicable Brooklyn accent, she carries the film effortlessly. 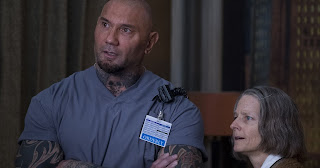 Though not without help. Indeed Hotel Artemis has a whole bunch of actors in it that I adore seeing. Sterling K Brown, whom most of you will remember as N'Jobu (Father of Killmonger) in Black Panther, plays Waikiki, an armed robber whose brother is shot in the theft of a bank vault and who winds up having to hole up at the Artemis as the riots spread across the city. Similarly holed up are Sofia Boutella, one of my favorite action actresses working, playing (what else) a French super-assassin, and Charlie Day (of Lego Movie) as a douchebag (Charlie Day is very good at this). Dave Bautista, meanwhile, who has become a much better actor since getting his start in Guardians of the Galaxy, plays Everest, who is so named because... well... you get it. The combination of all of these actors together would be enough for me, but add Zachary Quinto and Jeff Freaking Goldblum (playing a mafia don of all things) really pitches the film over the edge into truly awesome territory. I would watch these actors having lunch, let alone starring in a crazy kooky action-hijinx movie. And fortunately, Hotel Artemis is not about them having lunch.


Things Havoc disliked: Unfortunately, it's not a crazy kooky action-hijinx movie either. 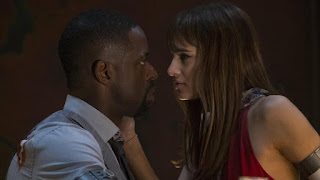 I don't know who's been setting up trailers for these films recently, but this is the third or fourth film in a very short amount of time whose trailers were written by lying liars who tell lies. Hotel Artemis was pitched to me in the trailers as being a fun action-comedy, a crazy madcap movie full of wacky hijinx and hilarious interplay between the various characters. Instead, the movie is a fairly dramatic character-study of the Nurse and a number of other characters, all set against the backdrop of a dystopian cyberpunk reality.

Now this isn't necessarily a bad thing, in fact the resulting film is possibly more interesting than the alternative would have been, but it's never a great thing to go in expecting comedy and not receiving it, and Hotel Artemis does that. Instead, there are interminable sequences wherein we are intended to get to know the characters better through threat and dramatic interplay. Some of these work, mostly because it's excellent actors engaging in them, and some do not, such as an endless sequence that goes nowhere involving a cop that the nurse decides to allow into the facility, in violation of the hallowed "rules". Your mileage will vary as always, I didn't have too much of a problem with the bait and switch, but do not go into this movie expecting a cornucopia of wacky fun, as suggested by the marketing campaign. 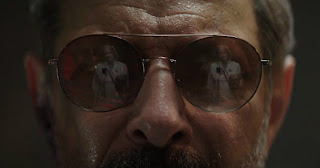 There's also the question of the film's ending, which is a muddled mess of bad ideas, as though the scriptwriters, having gotten to a certain point, could not figure out what to do afterwards. There are obligatory fight sequences, not shot with any particular energy or stylism, there are tearful departures and triumphant moments as characters overcome the handicaps they have been presented as living with, it all feels tremendously rote. The dystopian elements of the background setting are never expounded upon or dealt with in any way, making it feel as though large sections of plot were cut for time or interest, and the entire film just sort of... ends eventually. It's hardly enough to ruin everything, but it's not the best way to leave a strong impression of your movie as I'm walking out the door. 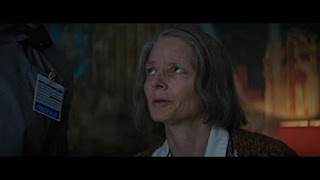 Final thoughts:   Hotel Artemis is a strange film, there's no question, and it is not the film that I was
expecting to watch, but despite a meandering plot that seems to waste a lot of time and an ending that goes nowhere in particular, the cast itself has such a genuine strength and chemistry to it that I have to admit I enjoyed it quite a bit. It's not a movie destined to reshape the landscape of film or anything (and it's presently engaged in bombing spectacularly), but it's a solid movie, interesting enough to be worth a watch, and unlike Red Sparrow, it will not send anyone into flashbacks.

Well, unless groaty hotels bring up your worst nightmares, that is.