One sentence synopsis:  A ballet dancer becomes a Russian spy at a specialized training school, before being assigned to uncover the identity of a mole in the Russian intelligence service. 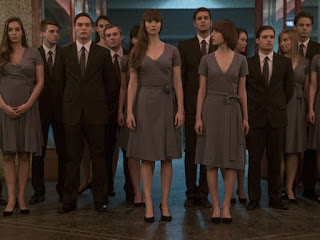 Things Havoc liked: The whole point of seeing one movie a week is that I get to see everything I want to, and nothing I don't, something I continuously remind the people who insist that I go see godawful pieces of obvious crap for their amusement. Overall, this system has worked well for me, but it's not perfect, as occasionally the movies stack up in such a way that I miss something I was hoping to catch. So it was with Red Sparrow, a spy thriller that looked, according to the trailers, like a cross between Atomic Blonde and the Black Widow movie that Marvel has been threatening to make for quite some time, all starring one of my favorite working actresses. So when, recently, I had a chance to double back and actually catch this one, I was excited to have a chance to do so?

So what did I think? I think the trailer house responsible for this one are filthy, filthy liars.

Why? Because Red Sparrow is not what it was sold to me as. It is not some kind of spy thriller romp through the badass parts of spydom. No, sir, it's something entirely different, and this fact is something anyone considering the movie needs to bear in mind. Red Sparrow has nothing to do with Black Widow or Spygame or other movies about the cool parts of spywork, it instead draws inspiration from two places: John leCarre movies about the bland, thankless, awful parts of real spywork, and I Spit on Your Grave.

Yeah, the Trigger Warning above was real, folks. Dig in. 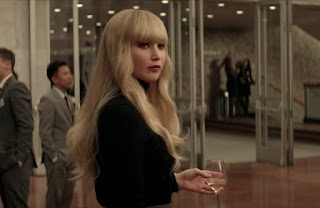 Red Sparrow, based on an award-winning novel from a former CIA operative, is about a Russian ballerina named Dominika Egorova (Jennifer Lawrence), who, following a career-ending injury, is forced by her connected uncle to join the ranks of spy workers, called Sparrows, who train in the arts of seduction, emotional manipulation, and general ruthlessness to advance the Russian policy of "Kompromat" (the discovery and exploitation of compromising material on foreign assets) by means of (I'm not making this word up) "Sexpionage". Everything is portrayed in as realistic a manner as possible, from the dehumanizing training methods, to the constant one-eye-over-your-shoulder means by which such agents are required to go about their actual work, with very little to look forward to beyond being dragged back home for an even more dehumanizing "debriefing"/interrogation. It should be said that Lawrence is very good at portraying all of this (even if her Russian accent is less only slightly more convincing than Scarlett Johanson's). She nails the paranoia and helplessness of the character, who is in a position wherein staying alive for five more minutes is contingent on her willingness to do unspeakable, disgusting things, and where the danger comes not from the CIA, but from her own handlers.

As you can imagine, this all makes Red Sparrow a very bleak movie, something director Francis Lawrence (Hunger Games, Constantine) takes as many pains as possible to reinforce. The color palate is all muted greys and overcast, icy landscapes, the sterile confines of doctors' offices and the dingy interiors of FSB black sites. Characters are constantly being forced to strip naked and cast aside moral distinctions, to do one disgusting, vile task after another, to seduce one another and spy on each other for the slimmest of political advantages. The music (Longtime Lawrence collaborator James Newton Howard) is dour and laden with pregnant minor chords, building an air of paranoia across the board. It's a quintessential film school movie, ultimately, where all the elements reinforce the tone of the thing, and are available to be broken down into their constituent parts so that essays like these ones can be written about them.


Things Havoc disliked: Which is all well and good, but we're not in film school here, we're here to talk about movies to see and movies to avoid, and all that bleakness is going to (hell, HAS) resulted in a big old warning sign being stapled on the film for a considerable number of people.

Look, I'm no enemy to bleak films. I thought Wind River was one of the best movies of last year. But there needs to be a point to all of it for such movies to be worthy of a recommendation, and Red Sparrow... struggles to find one. I know that the practice of spywork resembles John leCarre more than it does James Bond. I know that real spywork is not glamorous but thankless, boring busiwork carried out by mediocre men in airless rooms. I know all these things because fifty different films from The Spy Who Came in from the Cold onwards have taught me them, and so I need something beyond "Being a spy sucks" to justify being dragged through it all once again, especially when the film in question advertises itself as being a fun spy romp in the style of Salt. I've always said that it's not fair to criticize a movie for not being another movie, but it is fair to criticize a movie for not being the movie it pretended to be during the marketing push, and Red Sparrow sets off that alarm loud and clear.

Ultimately, the movie is just not enjoyable in a way that fun spy romps are made to be. It is a cryptic, difficult movie to penetrate, one that ultimately proves not as intelligent as it thinks it is, nor does it have any of the sense of trashy fun that might have elevated the material into a must-watch. Everything in the movie is done competently, but nothing about it demands to be seen, justifying the awful lengths to which the actors and characters are put with some kind of haunting, thought-provoking, or simply gripping story in some regard. Instead we get to watch a bunch of characters put through hell for a corrupt spy agency that hates them and then we get to go home. Fun times at the local cineplex? 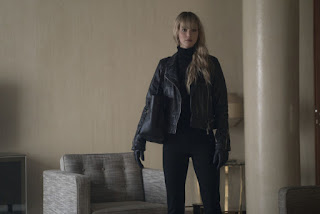 Final thoughts:   I'm never sure what to do with movies like Red Sparrow, which are well-made films, but ultimately not very enjoyable to the viewer. In part, it seems unfair to give them low scores, as the movies are, as I mentioned, well-structured and shot, but at the same time, I go to the movies to be entertained, and there isn't much in terms of entertainment value to a movie this grim for this little purpose. Fully half of the people I watched this one with walked out of it, simply uninterested in putting themselves through the thing for any further length of time, when the reward was simply going to be a moral of "Spywork sucks". As such, the best I can do is suggest that you make your own mind up as to whether Red Sparrow is a good one for you, and move on to the next movie.