One sentence synopsis:  A man crippled by the attack which killed his wife seeks an experimental AI-implanted surgery to enable him to seek revenge. 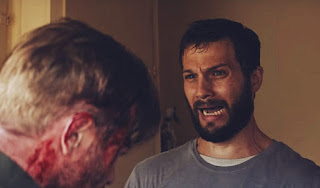 Things Havoc liked: I've talked a lot about MAEWISAMBAKEWTHW movies (that stands for Middle-Aged-Everyman-Who-Is-Secretly-A-Massive-Badass-And-Kills-Everyone-Who-Threatens-His-Women) on this little project of mine, in such fine fare as the Taken sequels and the Equalizer (soon to get an entirely unearned sequel of its own). But the truth is that the MAEWISAMBAKEWTHW film is really nothing more than a sub-genre of another, similarly-august type of film, the Revenge thriller. Revenge thrillers go way, waaaaay back, at least as far back as 1974's Death Wish, the Charles Bronson movie that spawned an entire series of films of decreasing quality, and inspired a genre that includes its own remake from earlier this year. I am neither in favor of nor against the Revenge Thriller, it is a genre like any other, but I was intrigued by one that offered to combine it with the cyberpunk techno-thriller genre to create something at least slightly different.

Upgrade stars Logan Michael-Green, the very, very poor man's Tom Hardy, as an auto mechanic named Grey who, in keeping with the theme of the genre, has his life turned upside down when a group of hardened criminals ambush him and his wife, killing her and crippling him. Traditional Revenge movies would involve him proceeding to train rigorously as a badass with the intention of taking violent, cinematic vengeance against those who have wronged him. The trick this time though, is that as a quadriplegic, Michael Green needs the assistance of the obligatory antisocial Tech genius (Harrison Gilbertson), who outfits him with a revolutionary new cybernetic system called STEM (SYMBOLISM!!!). This bypasses the need for the obligatory training montage, by enabling STEM to take control of Grey's body and eradicate his enemies with judicious Kung-Fu and General Ultra-violence. I have never been much of a fan of Michael-Green's, (his greatest previous claim to fame was Prometheus of all things), but it can't be denied that he meets the demands of the physical acting required to portray a man controlled by a robot which is kung-fu fighting, evidencing a minimalist combat-style that is actually quite unique in my vast experience of watching people beat the shit out of one another on screen. I won't go as far as to say that I became a fan of Michael-Green through this performance, Prometheus looms large in my memory, but he helps the movie more than he hurts it, and that isn't nothing. 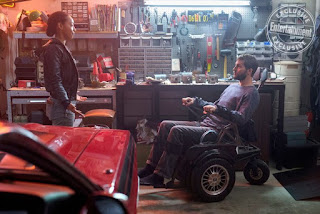 Upgrade was written and directed by Australian horror author and director Leigh Whannell, formerly of the Insidious series and some of the Saw sequels. Upgrade never gets to the point of torture porn films, but has a rather unique body-horror twist on the general Revenge-movie formula, involving the semi- and involuntary takeover of one's body by external forces, as well as the panic when those forces begin to fail. Whannell's direction isn't inspired, but the film has twists in it I didn't expect going in even accounting for the oddity of the genre-mashing premise. Revenge movies tend to be extremely simplistic affairs, our hero kills the bad men until he is done doing so. Occasionally someone, usually a woman, will fret over the inhumanity of the violence he is unleashing, but the film does not stop said violence until the bad men are dead, roll credits. Upgrade does not take a novel moral approach to this question, (something the actual Death Wish novel did, interestingly enough), but it does bring a bit of modern horror sensibility to its mashup. The direction and cinematography are dark and gruesome where they need to be, though no more. Overall the term "workmanlike" comes to mind thinking of Upgrade. It manages to avoid embarrassing itself, not a small feat given the pedigree of its actors and director. 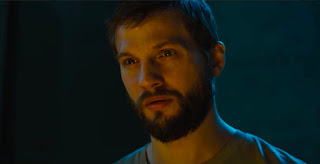 Things Havoc disliked: You can't gauge a movie like this one on the same lines that you could Casablanca or a Star Wars film. Moreso than anything else, Upgrade is a genre piece, and must be judged by the conventions of its genre, in this case R rated action thrillers. And by those standards, one must admit that Upgrade doesn't quite measure up. It's not that the film is terrible, it isn't, but there is little for an MPAA censor to become upset about. I have a long and tempestuous history with R-rated action films and this one could have been PG-13 with about 30 seconds of footage removed. That is not a compliment. I understand, this was an Australian micro-budget production with very little room for fancy effects, but when I go to see a R-rated action-body horror movie, I expect to see some real shit, man, not two-minute sections of awkward Kung-Fu followed by a little bit of blood. There's just not enough here to justify the great claims that a movie that pretends to be re-inventing the action genre makes, and as a result, true aficionados of the genre (both of them) need not worry that they are missing something earth-shattering in this one.

There is also the acting, which I would dearly love to say very little about, and cannot, because it generally sucks. I know I praised the physical work of Michael-Green, but the rest of the cast is pretty lackluster, even accounting for the fact that they're mostly Australian micro-production actors of no real pedigree. Everyone is wooden, reciting their lines with a bare minimum of emphasis, generally in the wrong places. People calmly and glibly ask not to be murdered by screaming psychopaths, while overselling perfectly basic comments to one another over dinner. The body horror aspect becomes forced after a while, with developments like guns built laboriously into people's arms (the advantages thereby offered over just carrying a damn gun do not jump out at me) which are utterly useless except to "shock" us with their horror (um... noooo?). The movie never becomes boring or outright bad, but the mechanics of the basic building blocks are not in order, and that does limit how good the thing can become. 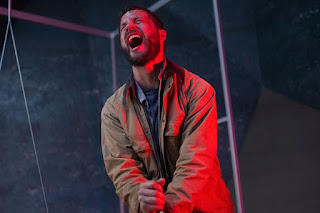 Final thoughts:   Upgrade is a decent little film, if nothing more, though nothing that will either give you a rush of supreme excitement to be remembered through the years, nor that will keep you up at night from its terrifying horror elements. It's a reasonably clever little film about cyborgs beating the crap out of one another that doesn't intend to be a whole lot more than the above sentence. If that sounds like it's your cup of tea, then go forth and bear witness. And if not, well, there are worse things for you to catch on late night cable in a few years' time.